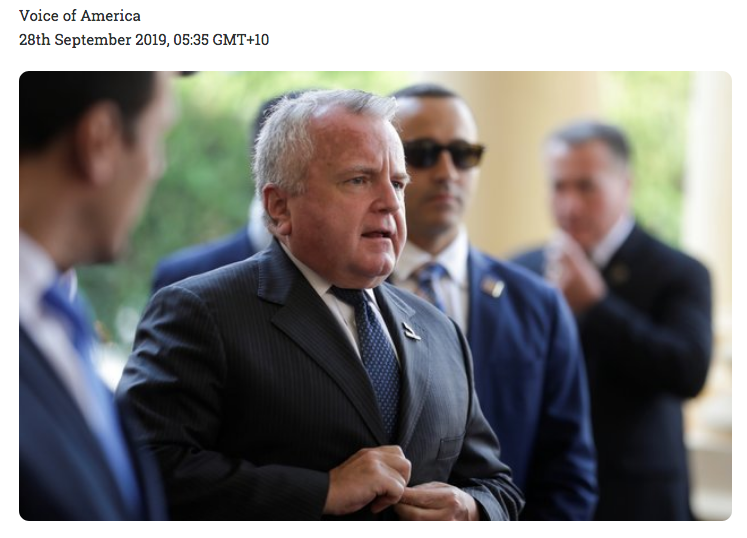 “The deputy secretary and the foreign minister reaffirmed the strength of the U.S.-Haiti partnership and shared hope that Haiti’s political stakeholders would soon identify a path to forming a government that remains firmly rooted in democracy and the rule of law,” State Department spokeswoman Morgan Ortagus said of the Thursday meeting.

In an interview with VOA’s Creole service, Edmond said the talks with Sullivan covered electoral law, legislative elections and a fuel shortage in Haiti.

“We discussed a lot of other important topics that we needed to discuss and which can contribute to reinforcing this partnership between the United States and Haiti,” Edmond said.

Anger over a nationwide fuel crisis, and long lines at gas stations that crippled public transportation, have prompted some people to vent their frustrations by attacking citizens and property. Many citizens depend on gasoline for essential daily activities, including cooking, electricity and transportation.

Earlier this week, Haitian President Jovenel Moise was forced to cancel a trip to New York to speak before the UNGA due to the unrest at home.

On Wednesday, in a 2:00 a.m. national address criticized by many for being too little too late, Moise repeated his call to all political sectors to set their differences aside and join him in a national dialogue to try to resolve the nation’s problems.

Following the speech, a Cabinet reshuffle was announced and the interior minister, Renaldo Brunet, was fired. Also Thursday, the chief prosecutor for Port-au-Prince, Paul Eronce Villard, announced his resignation. The minister of justice then announced Villard’s replacement, and in a subsequent statement announced his promotion to a position at the Appeals Court. The promotion was rejected by Villard.

Moise tweeted late Thursday that the offices of the group Religion for Peace had agreed to mediate the discussion.

The opposition responded by saying the time has come for Moise to go and called for mass protests Friday.