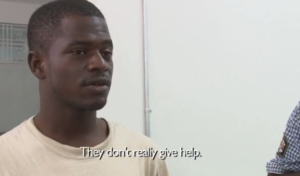 MIREBALAIS, Haiti — Under the leadership of the American NGO Partners In Health, led by Dr. Paul Farmer, the largest post-earthquake health project has finally materialized: the construction of the University Hospital of Mirebalais (HUM).

The Haitian government and its international partners, however, are still struggling to begin reconstruction of the Hospital of the State University of Haiti (HUEH) — the main hospital in Port-au-Prince — about three years after the earthquake of January 12, 2010.

The rebuilding of HUEH, commonly known as the General Hospital, was one of the first projects to be approved by the now-defunct Interim Commission for the Reconstruction of Haiti (IHRC). Created after the earthquake, the IHRC was co-chaired by former US President Bill Clinton and the Haitian prime minister, but it disappeared before the start of the hospital’s reconstruction.

Three years after the disaster, HUEH continues to function in buildings that were badly damaged. Buildings that represent a real danger to the hospital have been demolished, including pediatrics, laboratory and maternity. All these services are currently housed in tents.

Patients in this public health facility believe that destroying some parts of the building gives hope that construction will begin soon. But nobody knows when that day will come.

“I do not know why the construction has not yet begun,” said Christophia Saint-Jean, general secretary of the Union Employees of HUEH.

After a visit to Washington, DC in early 2012, former Haitian Prime Minister Garry Conille announced the start of construction for the month of May. Seven months later, there has not been any progress. The minister of health, Dr. Florence Duperval Guillaume, cited technical complexities to explain the delay in starting work, while others have reported disagreements between the major donors who fund the project—the US, French, and Haitian governments.

In fact, the causes of blocking the reconstruction of HUEH seem to be deeper than what is currently known. Director general of the Ministry of Health (MSPP), Dr. Marie Guirlène Raymond Charité, declined to be interviewed on the subject, stating, “the reconstruction project at HUEH is a political issue.”

At a press conference last October, the minister of health announced that construction on the hospital would start before the second half of 2013 and would be completed in 2015.

“We know that the work will take three years, but we do not know when they will be launched,” said another member of the board of the union of the hospital. He added, however, that he has had several meetings with members of hospital management regarding the reconstruction project. According to information provided by the Minister Duperval at the press conference, the work will be funded by the French, American and Haitian governments for $82 million. The initial cost of the project was $53.2 million, but the Haitian government agreed to contribute to the total.

“The Haitian government was under pressure from donors and will add the other $30 million,” said an official of the Ministry of Health, on the condition of anonymity.

The other side of the coin

Although the reconstruction of HUEH has been slow to start, the construction of the University Hospital of Mirebalais (HUM), 30 miles north of Port-au-Prince, has had more success. Conceived after the 2010 earthquake, HUM’s construction is already completed. The inauguration ceremony for the hospital, the largest project of post-quake reconstruction to date in the health sector, was held on November 6.

The construction of the new hospital is a sign of hope for the Haitian health system, which has struggled to provide quality services to the Haitian people.

“This hospital is the culmination of a dream dating back a quarter century, and underlines our commitment to the country and people of Haiti, which is stronger than ever after the earthquake,” said Farmer, co-founder of Partners In Health.

HUM is a 205,000-square foot, 300-bed facility. When fully operational, the hospital will be able to serve 500 patients a day. It will provide primary care services to roughly 185,000 people in Mirebalais and two neighboring communities with “30 outpatient consulting rooms and six operating rooms,” according to information provided by HUM.

Approximately $17 million has already been invested in the construction of HUM, and Haitian authorities and their partners plan for it to rise to the rank of a world-class hospital and a national center of education.

Paul Farmer’s operation would fit in anywhere, while the Port-au-Prince General Hospital would not be allowed to function as an animal abattoir in the United States where they have stiffer regulations – for the treatment of farm animals…than we do for the treatment of our people. On the few occasions that I have visited the General Hospital, over the years, I have always come away – shocked! Shocked at the hopeless, inefficient and disinterested approach to medical care – even though material, pharmaceutical support might be lacking. Working with what they have, leaves many questions, and criticisms.

Haiti – Haitian deserve better and must “demand better” for it to ever occur. Unfortunately, if you are a Haitian, with a sick relative, depending upon the immidiate assistance of hospital staff, you are likely to accept anything, even nothing… rather that voice  disapproval.

They had no interest.

So, I visited the University of Miami unit, at the airport. They asked what I needed, how much, then packaged the drugs in ice for me.

Time for a new and more effective approach