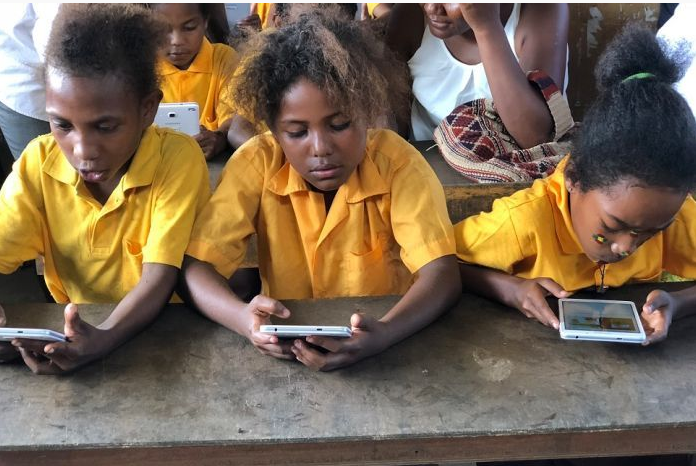 A Queensland woman, who hopes to help 20 million of the world’s poorest children learn to read, has won a prestigious award recognising the work of women in technology.

Rebecca McDonald runs Library For All, a free library app that gives children in developing countries access to books and educational resources via their mobile phone or e-reader tablet.

She sources and creates books using local writers and illustrators so children can read stories about their own culture, in their own language.

“We are there when books are not, so that every child can experience the joy of reading,” she said.

The Brisbane construction manager came up with the idea while she and her husband were volunteering in Haiti after the 2010 earthquake devastated the Caribbean nation.

“We visited school after school and everywhere we went they had nothing, absolutely nothing,” she said.

“No resources, no books, no desks, no chairs and I looked around and thought ‘how are these kids supposed to learn?’

Ms McDonald said the idea hit her about six months later, while she was researching to buy an e-reader.

“I had this vivid picture of a library that people were accessing on their mobile phones and I jumped to my feet and said to my husband, ‘I’ve got this idea’, he loved it and we went from there.”

It took three years to get the ambitious project off the ground.

“I knocked on a lot of doors looking for funding and most people were very polite but said ‘no’, some even laughed,” she said.

“We ended up funding it via a Kickstarter campaign.

“I think we were one of the first non-profits on Kickstarter and we raised $110,000 to launch our pilot in Haiti.”

Library for All launched in a school on the outskirts of Port-au-Prince in 2013.

Ms McDonald said remembering that first day in Haiti provided her with the inspiration to push ahead with the project.

“The first time the kids opened the books there was this magic moment where they start squealing and laughing and pointing and running around the room screaming,” she said.

“There’s just this special magic when kids get to see books that represent them, they can see themselves in the pages and that’s why we’ve focused so much on culturally relevant material.”

There are now libraries in schools in Haiti, Rwanda, Mongolia, Cambodia, the Democratic Republic of Congo, Papua New Guinea and Laos.

“It’s a big goal but there are over 760 million children globally that are not learning to read or write, so there is a huge need.”

In the past couple of years, Library for All has published more than 700 books, mostly in local languages.

“If they’re given the ability to learn to read and write in their mother tongue, they do far better at school,” she said.

“In most of the countries we’re working in, books in mother tongue just don’t exist.

“It’s virtually impossible for them to learn to read when they have nothing to read.”

Australia’s Indigenous languages up next

Now living back in Queensland, Ms McDonald is focussing her attention on providing Indigenous language books for children in remote Aboriginal communities, where there are usually only a handful of books in the local language.

Library for All has just published 10 books in the Gamilaraay language of communities, extending from the Tamworth-Armidale region in NSW to the Queensland border.

Next is likely to be a language in the Northern Territory.

“We’re hoping to work alongside communities here in Australia to publish more books in Indigenous languages, so the kids have access to a growing library that will sustain their interest,” she said.

Women in Technology co-president Joanna Field said the organisation was a leader for women in all branches of Science, Technology, Engineering and Mathematics in Queensland.

“Our network of more than 6,500 members and 21,000 supporters is one of the biggest in the nation … driving change for women in science and technology careers,” she said.

“The awards are really important because they recognise, showcase and applaud those women who are making their mark and provide the encouragement and inspiration for others to follow.”