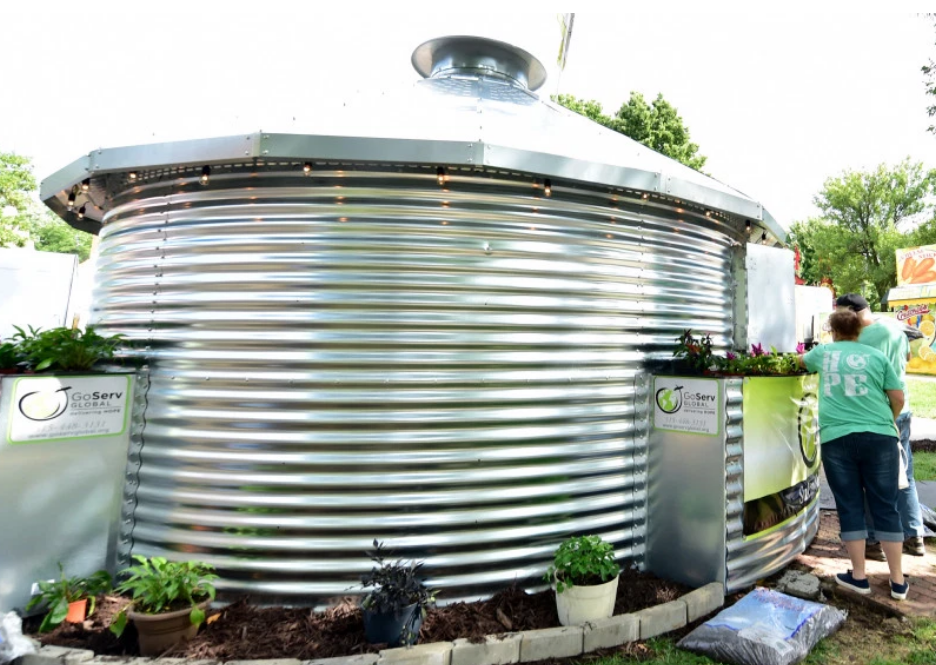 When an earthquake devastated Haiti in 2010, the safety director at an Iowa farm equipment maker emailed his boss with an 11-word pitch for a new product.

One year later, the Safe T Home was ready for market.

Now on display at the Minnesota State Fair, the 254-square-foot structure is a steel grain bin modified to hold displaced people instead of corn.

Each has a door, windows, loft and a ventilated double roof that keeps the home cool. Ballast boxes anchor them to a concrete floor.

The family-owned Sheffield, Iowa, company Sukup Manufacturing has built around 400 Safe T Homes. More than 300 are in use in Haiti, with the rest in Peru and, soon, a Uganda camp for South Sudanese refugees.

It has enough room to serve as permanent housing for a parent and six to eight children. The home and its larger iterations also have found use as a church, school and medical center.

A big test for the structures came in 2016 when around 200 in Haiti were hit by the Category 5 Hurricane Matthew. As locally built homes crumbled around them, the steel bins took minimal damage.

“People started crawling to them and just congregating there for shelter,” said Sukup spokeswoman Rachel Geilenfeld.

In the aftermath of the 2010 disaster, Sukup customer Ken DeYoung flew to Haiti in his private plane to deliver medical supplies and evacuate residents.

Donors, often churches, pay for the homes, which cost around $7,000 to build, take seven hours to install with basic tools and are built to last around 75 years, GoServ’s domestic director Dennis Anderson said.

Executive Director Paul van Gorkum said the next step for the Safe T Home is a Ugandan refugee camp, where durable housing is badly needed.

“This is a permanent solution,” he said.

Someday, he hopes the U.S. government will help transport the homes on military planes so it doesn’t take two weeks to get them to a disaster area.

It’s going to take more than one email to make that happen.

•Send a text message to 80888 to help GoServ Global. Text “hope” to donate, “mission” to join a mission trip, or “serve” to volunteer in another way.

•The Safe T Home display is located at the northeast corner of Judson Avenue and Nelson Street, near the DNR Building.