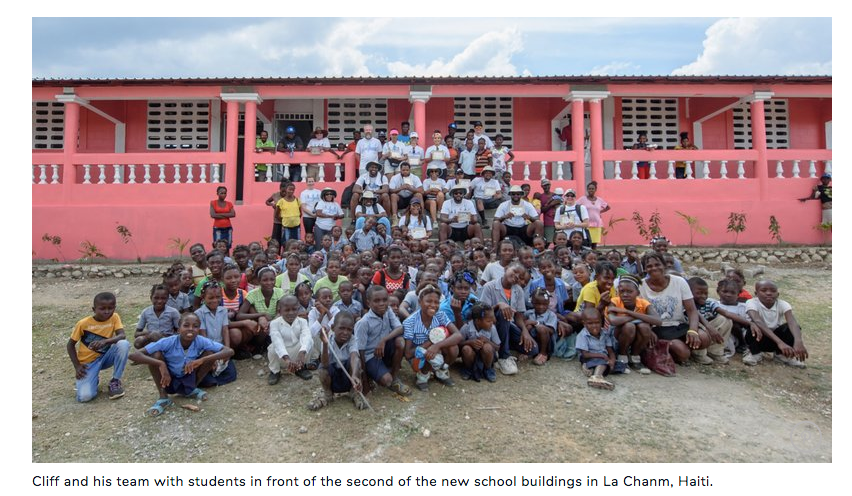 Cliff Avril always knew he wanted to do charity work in Haiti, but it wasn’t until his father’s unexpected death that he felt compelled to take action. Avril’s parents immigrated to the United States from Haiti in the ’80s. As a kid growing up in Jacksonville, Fla., Cliff had strong ties to his family’s native home. He spoke Creole with his parents and visited Port-au-Prince with his mother nearly every summer. His parents divorced when he was young, so he never made the trip to Haiti with his dad, Jean Samuel.

Before his death, Jean Samuel, known as Sam, and Cliff often talked about different ways Cliff could use his NFL platform to help communities in Haiti. On Memorial Day Weekend in 2015,  Sam died of a heart attack in the passenger seat of a car as he traveled to to Cliff’s home in Charlotte for the Avril family’s annual get together. As Cliff grieved for his father, he knew it was time to make good on the goals they’d once laid out.

“I always knew I wanted to do something eventually in Haiti, and once my dad passed it was like, stop making excuses, make it happen,” Avril says.

Through a connection from former Seahawks teammate Marshawn Lynch, Avril learned about an opportunity to build two classrooms in a poor community in Haiti with the WE Charity, formerly known as Free The Children. The following January, Avril traveled to La Chanm, a small inland town in central Haiti to see the place where his foundation would be funding two classrooms in a three-building school complex.

The old school building in La Chanm had no walls, just a tin roof held up by wooden beams. The structure was much too small to accommodate the 500 children that attended grades K-6.

“Once I went out there and saw the kids and the conditions that they were actually learning in, I said man, to heck with that, I’m just going to build the whole thing,” Avril says. A combination of donors, including the Cliff Avril Family Foundation, Seattle cornerback Richard Sherman and personal contributions from Avril, raised $332,750 to fund a new school (three separate buildings with eight total classrooms). Each building is hurricane- and earthquake-proof, so can double as shelters for the town.

Avril says he chose to focus efforts on a school because he was raised to value education and views it as a catalyst to real change. “I feel like education is the best way of teaching people how to get out of their situations, being able to analyze things and move around,” he says. “I want to teach these kids and give them hope. Hopefully they will be the ones to make a difference in Haiti.”

Last spring, Avril brought Lynch and teammate Michael Bennett on his visit to Le Chanm to check in on the progress. One day they decided to get a workout in, and have a run to the school grounds from the place they were staying, about a 20 or 30-minute jog away. On the way, through some tree branches, Avril spotted a bright pop of color on the horizon. The new school building, painted bright blue, the color chosen by the kids in the community. The sight gave him chills—it was the first time the impact of the project hit him. “I was in awe. It was one of those wow moments,” he says. “When you put out to do something, the concept of it, oh, okay, we’re going to build a school, but then to actually see the physical building and see how happy these kids are to have a classroom … Their old school is right next to the new one, and to see the difference in what you are able to provide for people, that was one of the coolest moments.”

Avril’s foundation also runs a mobile health clinic that makes quarterly visits to rural towns in Haiti. The clinic provides free healthcare for those who would otherwise be unable to afford a doctor’s visit. In 2016 Avril pledged to build a new house in Haiti for each sack he tallied. He made good on that, and financed 12 new homes for 11.5 sacks.

Avril’s 2017 sack tally was cut short due to a season-ending neck and spine injury when he took a knee to the chin in a game against the Colts in Week 4. He underwent disc surgery in November and is currently rehabbing from surgery. He plans to return to La Chanm in April to to help paint the last of the three school buildings and to visit his father’s hometown, Jocmel, for the first time. But a future return to the NFL isn’t guaranteed. In an interview with the Seattle Times in January, coach Pete Carroll questioned whether Avril will ever play football again.

And he’s nearly achieved that goal. Avril says he’s not yet running, lifting weights or actively working out but, “I’m feeling a lot better, getting better every day. There are really no limitations of what I can do from a day-to-day perspective.”

When Avril returns to Haiti this April to see the three school buildings finished, he’ll be thinking of his dad, and what Sam would say if he saw the joy the La Chanm kids have for their improved learning environment. “I think he would be proud,” Avril says. “I think he would be very, very happy with the direction that I decided to go with the foundation and helping his native country.”