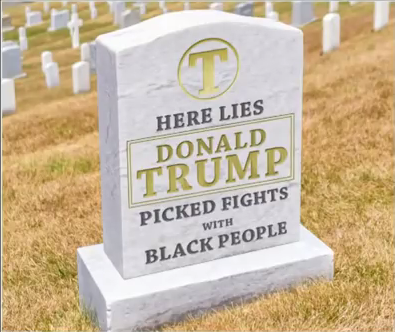 President Donald Trump has said more than once that he is “the least racist person you have ever met.” If that’s true, Bill Maher needs something explained.

“If Donald Trump keeps insisting that he’s the least racist person anyone has ever met, he has to explain why the single most consistent thing in his whole life is he loves to pick fights with black people,” Maher said during a segment on Friday’s Real Time on HBO. “Of all his myriad insanities, if I had to pick one line for his tombstone it would be, ‘Here Lies Donald Trump – Picked Fights With Black People.’”

The host went on to list incidents with Colin Kaepernick, LaVar Ball, Barack Obama, Eric Holder, “the war widow from the failed raid in Niger” and “the war widow’s congresswoman,” the Central Park Five, Steph Curry, “the UCLA basketball players arrested in China,” Whoopi Goldberg, April Ryan, “the entire NFL,” the cast of Hamilton, the cities of Atlanta and Chicago, Nigeria, Haiti, “and the entire continent of Africa.”

“I could continue this list, but we’d be here through February, which is Black History Month — or, as Trump likes to say, All Months Matter,” he joked.

BET’s The Rundown host Robin Thede had previously ran through Trump’s long history of disrespect toward black people. “The truth is Trump doesn’t care about anybody — especially black people — and he never has. But don’t believe me, believe history,” she said.

Earlier in January, Trump came under fire when he reportedly called Haiti, El Salvador, and African nations “sh—hole” countries, suggesting the U.S. “get more people from Norway” instead. Trump has since claimed he did not use that phrasing.

CNN’s Don Lemon, another person Maher noted as having angered Trump, stated on air, “the president of the United States is a racist.”

When it comes to the white supremacists and neo-Nazis who gathered for a rally in Charlottesville, Virginia last year where one anti-protester was killed, Maher pointed out that Trump claimed there were “very fine people on both sides.”

“Is it just a coincidence that he is perpetually pissed off at the NBA and the NFL, but golfers and hockey players never seem to bother him?” Maher asked.

Watch his full segment in the video here.