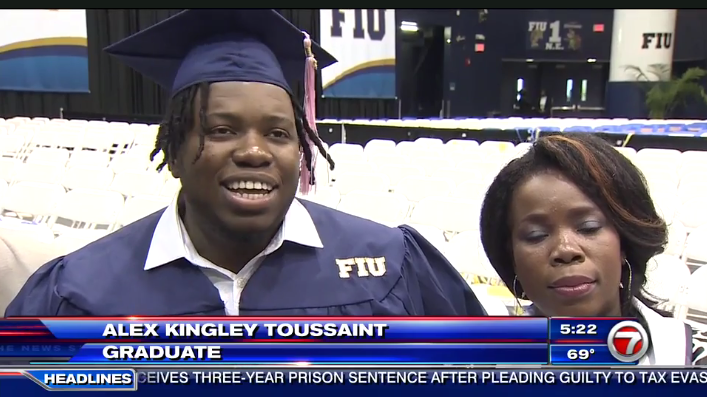 MIAMI (WSVN) – People say graduation day is supposed to mark the beginning of the rest of your life. However, for one FIU graduate, even after receiving his degree, he says his future in this country is uncertain.

Over the weekend, Alex Kingley Toussaint fulfilled his life-long dream of walking across the stage and receiving his college degree — a day he says wouldn’t have been possible without the tireless efforts of his mother.

Alex’s father was murdered in Haiti when Alex was only 8 years old. So to support herself and her three sons, Alex’s mother did everything she could to provide and keep her family safe.

Just as things were looking up, the devastating magnitude 7.0 earthquake of 2010 struck the island nation — destroying everything they owned.

“That’s when things really became dire,” said Alex. “She lost her business, and we lost most of everything we had.”

“Alex took several jobs as a piano and voice instructor in several music schools around Miami,” said Gladys Toussaint, Alex’s mother. “All the while moving towards his degree.”

Alex plans to further his career in opera or musical theater, and one day open a music school for underserved children back in Haiti.

Music is a passion that has deep familiar roots. “My father was actually a musician in his younger years and had to give that up for us – to raise a family,” said Alex. “Music basically saved my life.”

Alex’s mother shares the one advice that has kept her and her family positive in the face of adversity. “It is hope and work,” she said. “That’s it. That’s what keeps me going. That’s how I raised my kids. That gives sense to my life – hope and work.”

Despite all of Alex’s success, his future in the country is in jeopardy — depending on federal and legal determinations regarding TPS for Haitians.