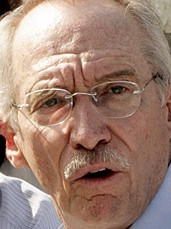 Political and student sectors denounced what they believe being a strange coincidence between the end of the mandate of the U.N. mission and the increase in the insecurity. Edmond Mulet, the representative of the Secretary General of the United Nations in Haiti, qualified Thursday of “absurd” the declarations that the United Nations Mission for the Stabilization of Haiti (Minustha) would be responsible for the resurgence of insecurity in the country at the time where the possibility of renewing its mandate is consider.

Edmond Mulet notes that each time Minustah arrives at the end of the mandate, one shows Minustah to be responsible for a situation of insecurity in the country to justify its presence “it’s ridiculous” declared Edmond Mulet, which states that the United Nations system in Haiti has no interest in creating situations of instability in the country.

He stated that they are there “pure fabrications of certain interested groups, which do not want the establishment of a Rule of law in the country”. The representative of the general secretary estimates that the position of those which claim the departure of the U.N. Mission do not represent the spirit of the majority of the Haitian people.

He stressed that insecurity is not as bad as they say, estimating that the increase noted today is caused by thousands of escaped who try to reorganize, while recalling that the insecurity in Haiti does not date of January 12th, 2010.

Concerning the renewal of the Minustah mandate, he was confident that “the mandate of Minustah will be renewed this year. The United Nations Security Council wish that the number of peacekeepers and UN staff in Haiti, which had been revised upwards after January 12, returns, in June or July 2011 with a workforce prior to the increase” specifying that “the United Nations Security Council not consider yet a departure of the peacekeepers of the country”.