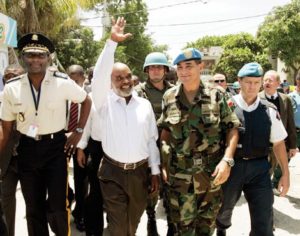 Many political sectors expressed these last weeks, doubts about the real willingness of a part of the international community to be neutral, especially following recent statements by the Secretary General of the Organization of American States (OAS) Jose Miguel Insulza who said that the electoral process was beyond reproach, trivializing criticism of political actors. The Civil Society Initiative (Initiative de la Société Civile ISC) for its part, was concerned and worried about the risk of fraud during the electoral process.

In response to these doubts and concerns, Edmond Mulet, the representative of Secretary General United Nations, said that the actueal Provisional Electoral Council (CEP), provides sufficient guarantees for the holding of elections and the international community has no reason to doubt the capacity of the electoral institution. He also encouraged citizens to participate massively in the forthcoming November elections.

Regarding the tabulation center, considered by various sectors, including Civil Society Initiative (ISC), as the main place where irregularities can be recorded, Edmond Mulet on the contrary, believes that this center is where the technical risk of fraud is the lowest. He noted that information processing will simultaneously by two different teams and national observers [Local] and international, as candidates will be invited to observe the counting process in the tabulation center. A statement that contradicts the words of Professor Rosny Desroches, head of the ISC that recently lamented that access to the central tabulation “was denied of access to all local observers”.

In addition, Edmond Mulet invites all candidates and voters who are witnesses of fraud during the electoral process to bring back the facts to the mission OAS/CARICOM and the United Nations will see how they can help correct them.

Although more moderate than the remarks of Jose Miguel Insulza, the fact remains that the communication line of the representative of Secretary General of the United Nations is the same. The opposite would have been surprising, considering the close cooperation and interrelations of these international organizations who think [probably] it is better to have “bad election” rather than a transitional government. A position that diverges more and more from certain political and civil society actors, who believe the contrary, they think that more time was needed to organize good elections, with a credible CEP, rather than elections “at all costs”.

Why is he peddling this cynical, dishonest garbage?

The UN does not want elections.

Bill and Hillary Clinton do not want elections.

The Preval government is the result of criminal MINUSTAH interference in the 2006 election. The took Preval’s 23 percent and expanded it into 51 percent to avoid a run-off which was constitutionally required.

Why should we think their game has changed?

MINUSTAH is a criminal organization and should be forced to leave by whoever wins the vote.