A Haitian amputee who lost his leg during the 2010 earthquake learns to use a prosthetic leg at a rehabilitative therapy center run by Handicap International in Port-au-Prince on Jan. 4, 2012. January 12 marks two years since an earthquake killed over 200,000 people. (Swoan Parker/Haiti)

Almost two years after a massive earthquake rocked Haiti, about half of the rubble has been cleared, aid groups are giving 1.1 million children daily midday meals and the number of Haitians in camps for displaced people is a third of what it was after the quake.

But cholera is endemic, nearly half the population can’t count on eating regularly and the country still relies on non-governmental organizations (NGOs) like Oxfam, CARE and Save the Children.

Haiti needs long-term solutions, says Nicolas Moyer, a spokesman for the Humanitarian Coalition. The coalition brought together Oxfam Canada, Oxfam Quebec, CARE Canada, Plan Canada and Save the Children to save costs and co-ordinate humanitarian appeals.

NGOs are part of that long-term solution and will remain in Haiti as long as they’re needed, Moyer said Thursday.

“But it’s also not up to them to, quote-unquote, fix the country. It’s up to the Haitian government, which needs to show strong leadership with some comprehensive strategies for resettlement and an economy that can create jobs,” Moyer said.

The organizations that make up the Humanitarian Coalition raised $15.5 million in Canadian donations and got another $12 million from the Canadian International Development Agency to provide temporary shelter, food and health care to hundreds of thousands of people after the quake. They also provided sanitation services and cash for work programs.

Immediately after the earthquake, Canada committed $220 million through the Haiti Earthquake Relief Fund and has disbursed 90 per cent of that money. From 2006 to 2012, Canada pledged $1 billion to the country, the poorest in the Western Hemisphere.

Only 47 per cent of money pledged by countries around the world has been disbursed, Moyer said. 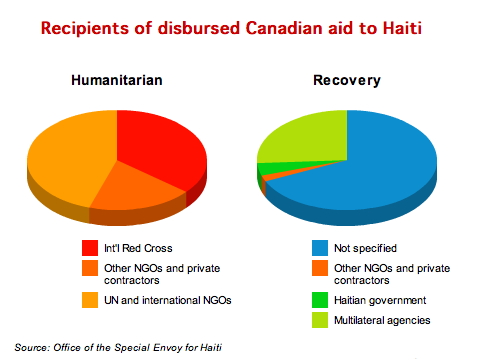 Moyer says 1.1 million children are getting midday meals daily, aid groups have helped rebuild dozens of hospitals and train medical personnel, and agricultural production is up for the past two years.

At the same time, cholera has become endemic, spreading through a country where not everyone uses latrines or washes their hands. Around half of Haitians face food insecurity.

Gary Shaye, Haiti country director for Save the Children Canada, said most NGOs are focusing on reduced areas and trying to have a longer-term impact.

“A challenge we face is most of the funding for Haiti is short-term, six months, one year, when the problems are really long-term,” he said.

“The best example of that would be cholera, which would require a 10- to 20-year investment in water and sanitation and behaviour change to really make a dent and a long-term improvement in cholera.