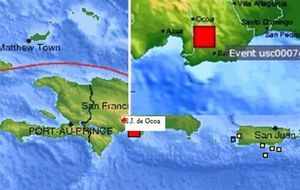 SANTO DOMINGO, Dominican Republic (AP) — A moderate 5.3-magnitude earthquake rattled the southern coast of the Dominican Republic just before dawn Thursday, resulting in cracks in several buildings but no injuries or evacuations.

The U.S. Geological Survey said the quake’s epicenter was six miles deep (10 kilometers) in San Jose de Ocoa province, 34 miles (55 kilometers) west of Santo Domingo, the capital of the Dominican Republic, which shares the Caribbean island of Hispaniola with Haiti.

The pre-dawn temblor sent hundreds of jarred islanders running out of buildings in the Dominican Republic, located near the intersection of the Caribbean and North American tectonic plates.