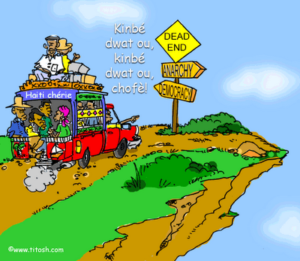 There is a growing heated debate surrounding the upcoming senatorial and municipal elections in Haiti.  National actors and new international players with their political agenda and economic interests are trying to shape the political and electoral environment once again by manipulating the environment.  The debate revolves around two central issues:  1.  will the elections take place in December 2013 or the first quarter of 2014; and, 2. will the threats of violence made by Senator Simon Desras and Fanmi Lavalas scare national and international actors and become an effective strategy to undermine elections?  The Senator is threatening violence in order to obtain an extension of the terms in office for ten senators, including himself, which end in January 2014.
In this context, most information on the electoral process has been biased and manipulated to fit the various agendas.  The following is historical context and a factual summary of the electoral process.
2009 Senatorial Elections: The electoral law used for the organization of these elections specifies that the terms of Senators elected for two years would end in January 2012 and those of four years in January 2014: https://sites.google.com/site/mnoehp2info/loi-electorale-2008-en-haiti
May 8, 2012: Attempt by Senator Simon Desras to extend the term in office of the ten senators. Fellow senators rejected his proposal to extend their terms in office on the grounds that it is not democratic, unconstitutional and therefore illegal: http://www.haitilibre.com/article-5590-haiti-politique-pas-de-prolongation-des-mandats-des-senateurs-sortants.html
July 9, 2012: President Michel Martelly wrote to the presidents of the two chambers and the president of the judicial branch asking them to choose three representatives from each branch of government to represent them in Electoral Council (CTCEP) according to article 191.1 of the constitution. http://www.slideshare.net/Stanleylucas/lettre-cep-9-juillet-12
October 9, 2012: The Judicial branch through the Superior Council of the Judiciary (CSPJ) nominates three members for the Electoral Council (CTCEP): http://www.slideshare.net/Stanleylucas/lettre-du-cspj-trois-3-membres-au-ctcep-1
February 2013: Eight months after the President’s request, Desras Simon, President of the Senate has yet to release the names of the three representatives selected to represent parliament for Electoral Council (CTCEP): http://www.haitilibre.com/article-8125-haiti-ctcep-les-3-representants-designes-du-parlement-toujours-pas-confirmes.html
March 15, 2013: Parliament appoints three members to the CTCEP: http://www.slideshare.net/Stanleylucas/lettre-du-corps-legislatif-3-representants-au-ctcep-25780578
April 17, 2013: Initiating a political plot and blackmail tactics, Senator Simon Desras blames the executive branch for the delay in the organization of the Senatorial and Municipal elections: http://www.metropolehaiti.com/metropole/full_poli_fr.php?id=22025
April 19, 2013 : The nine members of the new Electoral Council (CTCEP) are installed: http://radiokiskeya.com/spip.php?article9530
July 2, 2013: The CTCEP transmits the electoral law to the Executive Branch: http://radiokiskeya.com/spip.php?article9628
July 2 2013: Senators vote for legislation to extend the terms of ten senators (Simon Desras, Moise Jean Charles, John Joel Joseph, Francky Exius, etc) whose terms legally expired on the second Monday of January 2014.  In doing so, they violated the law in two important ways:  1.  the foundation of Haitian Law forbids passing a law that is retroactive; and, 2. the constitution is against the extension of a term of any elected official in Haiti: http://www.lenouvelliste.com/article4.php?newsid=118616
July 12, 2013: Senator Moise Jean Charles (Fanmi Lavalas) makes two statements against the organization of elections. On Radio Scoop FM on July 12 (A), following a question on how he would win the election, he responded that his goal is to create total chaos in Haiti. On July 13, on Radio Signal FM (B), Senator Jean Charles added that President Aristide and his Fanmi Lavalas party does not want elections in Haiti. A. https://soundcloud.com/haiticherie/haiti-plan-senateur-moise-jean B. https://soundcloud.com/haiticherie/moise-jean-charles-fanmi
July 23, 2013: The majority group in the Chamber of Deputies, the Parliamentary Bloc for Stability and Progress (PSP), cancels a vote of interpretative law passed by the Senate that illegally extended the term in office of the ten senators: http://www.radiotelevisioncaraibes.com/nouvelles/haiti/le_psp_rejette_la_loi_interpretative_vot_e_deux_jours_plus_tot_e.html
August 9, 2013: President Martelly met with members of Electoral Council (CTCEP) to inquire about the preparations of electoral contests: http://haitienmarche.com/index.php/nouvelles-en-bref/7041-le-president-de-la-republique-rencontre-les-membres-du-ctcep-autour-de-l-etat-d-avancement-du-processus-electoral

August 13, 2013: President Martelly invites the various political parties to a meeting to discuss the organization of elections and the funding of political parties: http://www.radiotelevisioncaraibes.com/nouvelles/haiti/les_partis_politiques_invit_s_rencontrer_le_pr_sident_martelly_a.html
August 24, 2013: Nearing the end of his term, Senator Simon Desras made ​​threats of violence to intimidate national officials and MINUSTAH in order to obtain an illegal extension of its term in office. Former President Aristide is behind the threats of Moise Jean Charles (Fanmi Lavalas) and Simon Desras (Fanmi Lavalas). Leveraging the fact that international actors always cave against threats of violence in favor of stability, Aristide is employing familiar tactics used in previous elections from 2004-2006: http://www.lematinhaiti.com/contenu.php?idtexte=36699&idtypetexte
August 26, 2013: The Electoral Council (CTCEP) and IFES signed a technical agreement: http://lematinhaiti.com/contenu.php?idtexte=36707

August 27, 2013: Senator Simon Desras mobilizes a coup and attempts to force the resignation of President Martelly.  As the President of the Senate, his end goal was to become the Provisional President of Haiti for three months and hand over power to Aristide: http://www.metropolehaiti.com/metropole/full_une_fr.php?id=22435
August 27, 2013: The Executive Branch, through the council of ministers, analyzed, modified and voted on the electoral law submitted by the Electoral Council (CTCEP). The Minister of Justice then submitted the electoral law to parliament. The same process of analyzing the electoral law took two months in comparison to the Preval administration that took three months for the same process: http://www.metropolehaiti.com/metropole/full_une_fr.php?id=22440
August 27, 2013: The Executive Branch submitted a copy of the Electoral Law to the Haitian parliament: http://www.slideshare.net/Stanleylucas/avant-projet-de-loi-electorale-finale
August 28, 2013: The Special Representative of the OAS countries, formally denies the claims of the President of the Senate, Simon Dieuseul Desras (Fanmi Lavalas) that the hemispheric organization has contributed to the electoral law that President Michel Martelly submitted to parliament. Desras also claimed that his actions have the full support of the Congressional Black Caucus (CBC): http://radiovision2000haiti.net/public/37554/
August 28, 2013: Simon Desras states that the filing of the Electoral Law by the executive to parliament is a media show and parliament may consider this law inadmissible: http://www.lematinhaiti.com/contenu.php?idtexte=36730&idtypetexte=
August 28, 2013: Three anomalies arise during a meeting of the Security Council of the United Nations on Haiti.  First, there is no comment on the responsibility of the United Nations in the cholera epidemic in Haiti while all the studies trace the epidemic to the UN Nepalese peacekeepers.  Second, the Special Representative of the Secretary-General leaves the impression that the Executive Branch slowed the Haitian electoral process and in fact the President of the Haitian National Assembly, Senator Simon Desras, took over eight months to appoint its representatives to the Electoral Council (CTCEP). Note that the Executive made its choice immediately, and the Judiciary made theirs in three months. The statements leave the impression that she is endorsing one side of Haiti’s political spectrum.  Third, Haitian electoral law is clear, the mandate of the 10 senators ends the second Monday of January. The intervention of Madame Sandra Honore, Special Representative in Haiti of the UN Secretary General creates confusion on this issue while the members of the Security Council were more positive on the progress that Haiti made during that period: http://www.slideshare.net/Stanleylucas/compte-rendu-du-conseil
August 29, 2013: The President of the Chamber of Deputies, Tholbert Alexis, stated that the House will vote on the Electoral Law within a month: http://www.metropolehaiti.com/metropole/full_une_fr.php?id=22447
August 30, 2013: Appointment of a committee of thirteen members at the Chamber of Deputies to examine the Electoral Law submitted by the Executive Branch. Depute Kenston Jean Baptiste is announced as the Chairman of this committee: http://lenouvelliste.com/article4.php?newsid=120713
September 2, 2013: Proposal to elect new leadership in the senate to replace the senators whose term will expire on the second Monday of January 2014, while reducing the quorum to ensure the functioning of the Senate. There is already a legal and constitutional precedent on this issue as the Senate of Haiti has experienced this before.  Few years ago, the terms of two-thirds of the senate expired and the quorum was reduced to ensure the functioning of the senate until the elections.
September 3, 2013: Nearly five months after their installation members of the Electoral Council (CTCEP) have not provided a report on the state of preparations for the elections.
September 6, 2013: The electoral law after minor changes is cleared by the Special Commission of Deputies and sent to the President of chamber of deputies for a vote by the assembly: