Factory co-founded by Matt Damon and promising minimum wage, hopes to bring responsible production of high-end apparel to the country 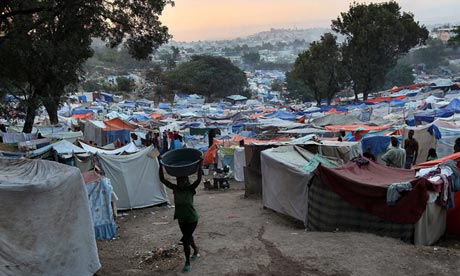 Nearly four years after the earthquake with aid agencies having poured billions of dollars into relief projects, the stability of Haiti’s garment industry seems to be hanging by a thread.

Haiti’s garment industry is focused on low-end apparel clothing and cranking out plain T-shirts for North American companies such as Gildan, Hanes and Walmart. According to the Inter-American Development Bank (IDB), the industry makes up 80-90% of the country’s exports. And thanks to free-trade deals agreed by the US Congress, most Haitian garments are able to enter the US duty-free.

Yet Haiti is still the poorest country in the northern hemisphere – the World Bank estimates that gross national income is $760.

For Amy Wilentz, a US journalist and writer who has covered Haiti extensively and has been quite critical of the Caracol Industrial Park – seemingly the biggest aid-funded project of the post-earthquake recovery – the industry won’t help lift people out of poverty.

“A Haitian garment worker makes less in a day after expenses than an American spends on one of the dozens of cheap Walmart T-shirts the Haitian has stitched together,” says Wilentz.

A T-shirt from Walmart is likely to cost at least $7. The minimum wage in Haiti is 300 Haitian gourdes a day (roughly $6-$7) and even though this is peanuts, there is the argument that paying workers even $5 a day could put factories out of business. Some workers are said to be paid as little as $3.50 a day.

T-shirt production is cheap, easy and requires little skill. Because of this and the high demand, if wages get too expensive, production can just relocate to another poor country, where costs can be kept low.

To put it simply, low-end apparel T-shirt production is one of the least attractive parts of the industry.

Industrial Revolution II (IRII) is a celebrity-backed garment factory that is hoping to bring high-end apparel and a degree of social responsibility to Haiti. Its co-founders include the CEO of Diesel Canada and the Hollywood actor Matt Damon. Production started in September.

“IRII was born out of a frustration with the lack of efficacy of traditional philanthropic and international aid programmes in Haiti, and a desire to create sustainable change through economic development and higher-value job creation” explains Rob Broggi, CEO and founding partner of IRII. According to Broggi, the Haitians want economic opportunities, not handouts.

The factory prides itself on a commitment to pay workers at least the minimum wage – there’s also a bonus scheme based on the number and quality of units produced – giving the unemployed an opportunity to train and acquire new skills, increasing their future employability, and donating half the profits to community and social programmes within the country.

Earlier this year, quality-apparel brand Boxercraft announced that IRII would join its list of suppliers. It’s an indication that companies are willing to move away from the mass production of turning out T-shirts on the cheap and are starting to consider responsible sourcing practices. The hope is that other brands will also see the potential in the venture and that they’ll place orders with IRII for high-end clothes that might usually get produced in places like LA.

“In the shadow of the Rana Plaza factory collapse [in Bangladesh], consumers are finally waking up to the harsh realities of the apparel manufacturing industry,” continues Broggi. “There are still very few manufacturers recognised for social integrity and ethical business practices. IRII has a unique opportunity to shift the paradigm in an industry that has been too slow to change.”

IRII’s transparency over its commitment to paying the minimum wage in particular is something that can be hard to come by. Both Gildan and Hanes were asked to comment on whether they were committed to third-party sub-contractors that pay workers a fair or the minimum wage. Neither answered, but both say they respect human rights and are members of the Fair Labor Association (FLA), which means that they are required to be “socially responsible” corporations “aiming to achieve the highest possible standards of working conditions in all [their] facilities”.

According to a report published by Better Work in April this year, 100% of Haitian manufacturers audited were still paying workers around 200 gourdes a day, some several months after the 300 gourdes minimum wage had been introduced.

It can be tricky for companies to monitor and regulate working conditions and wages in factories they don’t own, but should those with interests in the country – if they can’t guarantee high ethical standards – pull out, and would aid relief be better spent elsewhere?

“I’d hate to see any investors who create jobs pull out of Haiti, even the dreadful garment industry,” argues Wilentz. “But investment in locally-generated businesses, in construction companies, in local banking, in artisanal crafts, in recycling and waste control, in a responsible tourism industry would all benefit Haitians more than investments in shark-like global exploitation.”

There may be more sustainable alternatives to the industry that offer longer-term stability, but for now it seems that IRII is a diamond in the rough. Whether it’ll be the cornerstone of a momentous shift in bringing production of high-end apparel to the country is yet to be seen. But that’s what is needed if Haiti is to be given more economic opportunities and higher wages and if we are to begin to move away from seeing the industry simply as a transfer of jobs from one poor country to another.

“Now is the time to create a manufacturing brand within the industry that fashion labels and consumers alike automatically associate with social integrity and a revolutionary business model,” concludes Broggi passionately.

Let’s hope other players in the industry join this revolution.