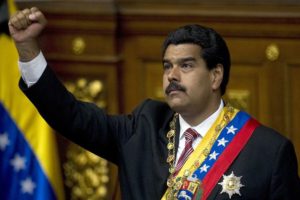 That message — “We alert the country and the world of the intent to change the will of the people!” — was followed by speech to supporters. “I want the truth to be known,” Capriles said. “We are going to do everything in our power to reveal it. Mr. Maduro, if you were illegitimate before, now you definitely are!” He demanded a hand recount; Maduro agreed to an audit of the results by the National Electoral Council, which earlier had declared the results “irreversible.”

Maduro, the “Cuba-trained ideologue and the man the cancer-stricken Chávez anointed as his heir in December,” was always slated to win on Chavez’s coattails, says Mary Anastasia O’Grady at The Wall Street Journal. The state of the economy and rampant crime mean that “in a fair fight, the 40-year-old Mr. Capriles might have won easily.” But of course, between Cuban agents and the Chavez machine, the fight was never a fair one.

That makes the closeness of the election all that much more remarkable, says Irene Caselli at BBC News. But Chavez supporters weren’t all that worried about the narrow margin of victory.

Screaming and chanting took over. Beer was thrown into the air. People hugged each other. Nobody seemed to mind if the victory was narrow. “This victory is dedicated to Hugo Chavez, our commander. My vote went to him,” said one woman. [BBC News]

“Elections don’t come much closer,” and Capriles isn’t going to cede this one without a fight, says The Economist. But “even for those who accept the official result, the government candidate’s victory looked remarkably like a defeat.” With a tiny 235,000 votes separating the two candidates, according to the official tally, Maduro managed in a 10-day campaign to “squander almost all the 1.5m-vote advantage that Chavez had obtained over Mr Capriles just six months ago.” And governing won’t be all that easy, either.

[Maduro’s] political capital consisted almost exclusively of the late president’s endorsement. He faces an uphill struggle to impose his authority on a faction-ridden chavista movement that was hitherto held together by the unquestioned authority of Chavez himself. Mr Maduro’s narrow victory, which many even on his own side will see as a defeat, makes that task all the more difficult….

Mr Capriles’ task is not much easier. Although he has consolidated his status as the undisputed leader of the Venezuelan opposition, he will now be under pressure to prove his claim that he was cheated of victory. With no independent institutions to turn to, his battle will be a political rather than a legal one. [Economist]

The only thing that seems clear is that “with Chavez gone, Venezuela is on the cusp of a new era,” says The Economist. Venezuela is obviously bitterly and almost evenly divided. Maduro will probably hang on to power for at least a few years, but he’ll almost certainly find that his “difficult election marks the beginning of an even trickier presidency.”