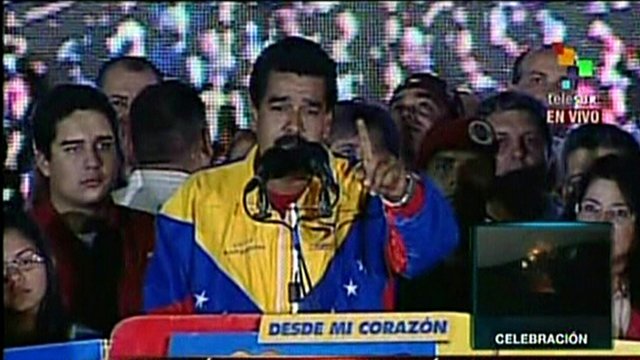 Will Grant in Caracas: ”It’s a questionable victory from the opposition’s point of view”

Mr Capriles, who lost by a very narrow margin, said there were more than 300,000 incidents from Sunday’s poll that needed to be examined.

Socialist Nicolas Maduro has called for the results to be respected.

The election was called after Mr Chavez’s death from cancer on 5 March.

Mr Maduro, a former bus driver whom Mr Chavez had named as his preferred heir, won 50.7% of the vote against 49.1% for Mr Capriles.

The National Electoral Council said the results, which it announced on Sunday night, were “irreversible”.

Russian President Vladimir Putin and Cuban leader Raul Castro were among the first heads of state to congratulate Mr Maduro on his win.

As the news of Mr Maduro’s victory emerged, celebrations erupted in the capital, Caracas.

The waiting was long and tense. Rumours on Twitter were growing. Both sides were cautious, but fireworks were going off all around the city.

Even in front of the Miraflores presidential palace there was uncertainty. People started gathering early on in the night, but they listened to radios to keep across the official results.

The National Electoral Council’s announcement was broadcast through loudspeakers among the crowd, but people didn’t wait to hear the margin by which Nicolas Maduro had won.

Screaming and chanting took over. Beer was thrown into the air. People hugged each other. Nobody seemed to mind if the victory was narrow. “This victory is dedicated to Hugo Chavez, our commander. My vote went to him,” said one woman.

Thousands of jubilant supporters took to the streets, dancing, singing and blasting car horns, while fireworks lit up the night sky. Opposition voters banged pots and pans in protest.

Speaking outside the presidential palace, Mr Maduro told crowds that the result was “just, legal and constitutional”.

He said his election showed Hugo Chavez “continues to be invincible, that he continues to win battles”.

Mr Maduro, who was wearing a tracksuit top in the colours of the Venezuelan flag, said he had spoken to Mr Capriles on the phone, and that he would allow an audit of the election result.

He called for those who had not voted for him to “work together” for the country.

But Mr Maduro’s margin of victory was far narrower than that achieved by Chavez at elections last October, when he beat Mr Capriles by more than 10 percentage points.

Almost immediately one member of the National Electoral Council who does not have government sympathies called on the authorities to carry out a recount by hand, a call later echoed by Mr Capriles himself.

At Mr Capriles’ campaign headquarters the mood was sombre, as his supporters watched the results on television. Some cried, while others hung their heads in dismay,

“It is the government that has been defeated,” he said. Then, addressing Mr Maduro directly, he said: “The biggest loser today is you. The people don’t love you.

“Mr Maduro, if you were illegitimate before, now you are more so.”

Venezuela has one of the highest rates of inflation in the region and crime rates have soared in recent years, particularly in Caracas. Food shortages and electricity blackouts are also common.

But perhaps Mr Maduro’s biggest challenge will be trying to govern a country which is so deeply divided and polarised, and where the opposition say they have an increasingly legitimate stake in the decision-making process, our correspondent says.

The closeness of the race has also caused introspection inside Mr Maduro’s own United Socialist Party (PSUV).

The man considered to be Mr Maduro’s main rival, National Assembly President Diosdado Cabello, tweeted that the results “oblige us to make a profound self-criticism”.

Mr Maduro had been serving as acting president since Mr Chavez died. 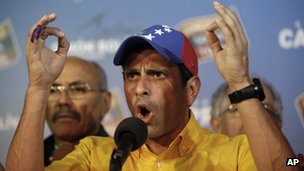 Mr Capriles has refused to accept the results

He is due to be sworn in on 19 April and serve until January 2019 to complete the six-year term that Mr Chavez would have begun in January.

Mr Chavez was a divisive leader. To his supporters he was the reforming president whose idiosyncratic brand of socialism defeated the political elite and gave hope to the poorest Venezuelans.

He effectively used his country’s vast oil reserves to boost Venezuela’s international clout, and his strident criticism of the US won him many political allies in Latin America.

However, his political opponents accused him of being an autocrat, intent on building a one-party state.

Chavez effectively loses the election, which makes the future of Venezuela a very volatile situation. Without the Chavez charisma, the Venezuelan people will be unwilling to accept the ongoing incompetence of his government.

Chavez, the charismatic leader, was able to keep the people with him, even as he squandered Venezuela’s treasury.

It is sad that he did not have any effective economic advisers, otherwise the good things he did, would remain in place, and his economy would be a strong one.

Haiti’s future is tied to the survival of this Venezuelan government.

Let us hope that the new president does not abandon Haiti in his rush to appease his opponents.