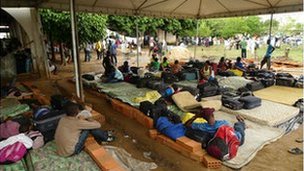 Acre, in the Amazon region, has asked for additional funding to cope with the influx.

More than 900 Haitian immigrants to the Brazilian state of Acre have been allowed to stay in Brazil.

A federal task force sent to Acre to deal with a rising influx of migrants issued them with residency and work permits.

Acre declared a state of emergency last week after about 1,700 arrived in the state within a fortnight.

Most of the immigrants are Haitians, but there are also Africans and Asians whose situation remains unresolved.

The move by the federal task force comes just months after the government said it would step up border checks after granting residence visas to some 4,000 Haitians already in the country in what it said was a one-off move.

Since then, an increasing number of immigrants have arrived in Acre, using smuggling routes from Peru and Bolivia because dense vegetation in the Amazon region makes it difficult for border police to patrol them.

While most are Haitians seeking a better life after the 2010 earthquake left much of their home country destroyed, others come from as far afield as Senegal and Bangladesh.

The Brazilian government grants 1,200 work visas per year to families from Haiti in recognition of “the country’s vulnerable economic situation”, but demand has been much higher than the annual quota.

Most are attracted by Brazil’s growing economy and the opportunity to work in construction projects for the 2014 football World Cup and the 2016 Olympic Games.

Immigrants from nations other than Haiti say they feel that the government is discriminating against them.

One migrant, who did not want to be named or give his country of origin, told BBC Brasil that “the situation where I come from is as bad as in Haiti, so why does the Brazilian government treat us differently?”

The federal government said it would send extra funds to provide accommodation and food for migrants currently living in shelters in the town of Brasileia, which has seen the biggest wave of migrants in Acre state.

But state governor Tiao Viana said he thought a broader strategy was needed.

“We cannot imagine that Brazil is going to solve the problems of the world and Africa,” he told BBC Mundo.