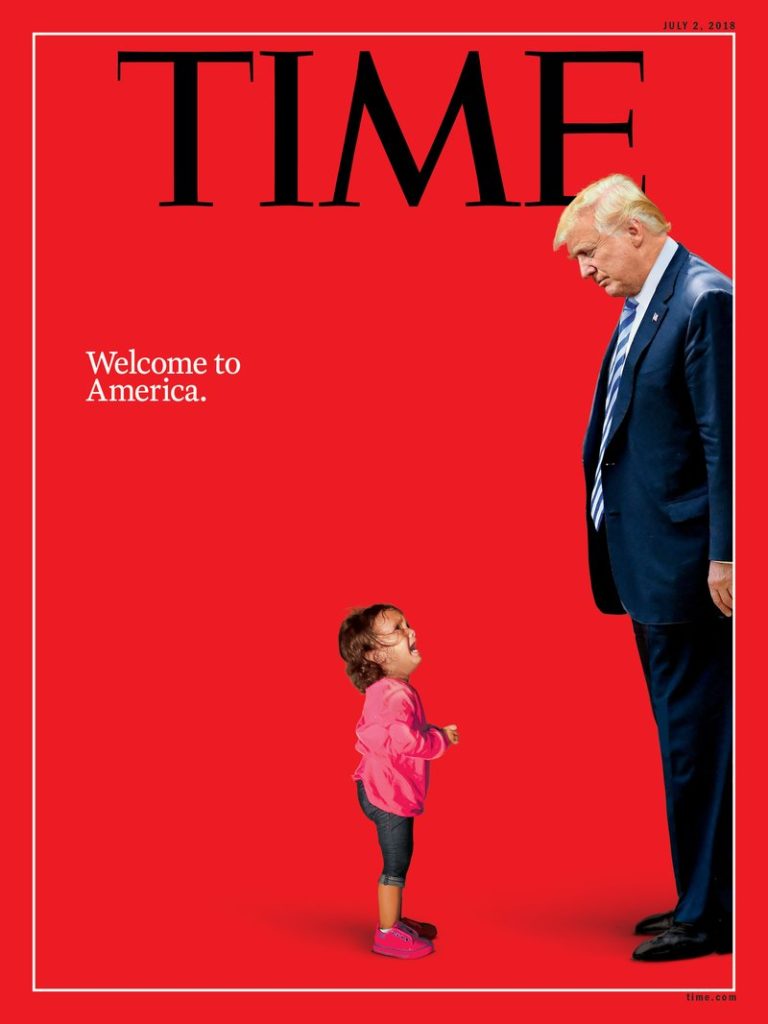 Presidents have many jobs, and one is telling us who we are.

For the first 240 years of U.S. history, at least, our most revered chief executives reliably articulated a set of high-minded, humanist values that bound together a diverse nation by naming what we aspired to: democracy, humanity, equality. The Enlightenment ideals Thomas Jefferson etched onto the Declaration of Independence were given voice by Presidents from George Washington to Barack Obama.

Donald Trump doesn’t talk like that. In the 18 months since his Inauguration, Trump has mentioned “democracy” fewer than 100 times, “equality” only 12 times and “human rights” just 10 times. The tallies, drawn from factba.se, a searchable online agglomeration of 5 million of Trump’s words, contrast with his predecessors’: at the same point in his first term, Ronald Reagan had mentioned equality three times as often in recorded remarks, which included 48 references to human rights, according to the American Presidency Project at the University of California, Santa Barbara.

Trump embraces a different set of values. He speaks often of patriotism, albeit in the narrow sense of military duty, or as the kind of loyalty test he’s made to NFL players. He also esteems religious liberty and economic vitality. But American’s 45th President is “not doing what rhetoricians call that ‘transcendent move,’” says Mary E. Stuckey, a communications professor at Penn State University and author of Defining Americans: The Presidency and National Identity. Instead, with each passing month he is testing anew just how far from our founding humanism his “America first” policies can take us. And over the past two months on our southern border, we have seen the result.

On April 6, Attorney General Jeff Sessions announced a new “zero tolerance” policy toward those crossing illegally into the U.S. from Mexico. In mere weeks, over 2,000 children were taken from their parents and held, alone, sometimes behind chain-link fences, under the cold care of the federal government. In Texas, three “tender age” centers were set up for detained toddlers and infants. Incessant wails of “Mamá” and “Papá” were heard on audio from a Customs and Border Protection detention center. An advocate told of a child being led away from her mother crying so hard she vomited. In a case mocked by former Trump campaign manager Corey Lewandowski, the child taken from a parent was a 10-year-old with Down syndrome.

You Might Like
Nearly 2,000 Children Have Been Separated From Their Families During Trump Border Crackdown
Here’s What It’s Like Inside a Detention Facility for Immigrants, According to the Border Patrol

The reality on the southern U.S. border was so difficult to reconcile with Americans’ vision of themselves that Trump did not even make the effort. The President’s first mention of the order to separate children from their parents was a May 26 Twitter post calling it “horrible” even though he had personally authorized it. Three weeks later, his motives were fully in the open: by driving attention to the border, his signature campaign issue, Trump aimed to force a vote on his long-promised border wall before midterm elections can undo the GOP majority in Congress.

The attention part certainly worked. A week after his return from the June 12 summit with North Korea’s dictator, family separation dominated the national conversation like no other political story since former FBI chief James Comey was shown the door. A steadily building wave of revulsion washed over the political spectrum, from MSNBC to the editorial page of the Wall Street Journal to Franklin Graham and into the White House living quarters, when a spokeswoman for the First Lady said she called for “a country that governs with heart.”

Which leaves us facing a question: What kind of country are we? The world has been nervously asking that since November 2016. And while Trump ultimately capitulated on the forced separation of children, his new order suggested that families would be detained not only together, but perhaps indefinitely. For many Americans, the forced separation of immigrant families left them looking into the void from which the brutal policy emerged: the dark space left by the words Trump does say.

In the first days of the Trump Administration, the State Department moved to drop two words—just and democratic—from the list of qualities the U.S. sought to promote beyond its borders. The change did not go through, but the effort signaled a retreat from idealism that is re-ordering the world. In the name of “America first,” a slogan that first surfaced to keep America out of World War II, Trump is angrily sawing away at the global structures the U.S. spent decades building after prevailing in that conflict, which left America not only as the globe’s only intact major economic power, but also holding the moral high ground. Imperfect in myriad ways (lynching was still common in 1945; women had been allowed to vote for just a quarter-century), the U.S. looked plenty good beside the Third Reich and Imperial Japan, and vowed to do better. In a postwar world divided between the West and communism, America assumed the role of beacon. Presidents spoke relentlessly of democracy, humanitarianism and universal rights.

“Go to the United States, that’s the place,” was what Ivars Kalnins’ parents heard in the displaced-persons camp where the family lived for five years after World War II, having fled their native Latvia ahead of the Soviets. Kalnins’ father, as a city official, was a target for the Communists. The young family ended up in the southwestern Wisconsin hamlet of Burton, sponsored by the families of St. Paul Lutheran, where my father later preached. Kalnins’ dad started out as a hired hand, doing the chores for local farmers that Mexicans now do, for half the wages a local would demand. His son, Ivars Kalnins, grew up to be a lawyer and ardent Trump supporter.

“My opinion on immigration basically is, wait your turn,” Kalnins says. “We waited five years. I don’t have any time or use for people sneaking in. You can’t blame them for wanting a better life. On the other hand, we can’t take in the whole world here, because everyone wants a better life. It’s up to them to make the place they’re from a better place.”

Kalnins’ journey from refugee to Trump loyalist is as complex and nuanced as the immigration issue, then and now. His grandmother, who had suffered a nervous breakdown from incessant shelling, ended up in Britain, having been told the U.S. was not accepting refugees who were disabled physically or mentally. (“So there’s your family separation,” he says. “I’ve been through it. It happens.”) But it was a Republican, Reagan, who extended amnesty to undocumented immigrants, and a Democrat, Obama, who deported more immigrants than any previous President and detained families, a policy abhorred by liberal critics.

But Obama also spoke of America’s lofty values with an eloquence that intentionally sought to echo Reagan. “Nobody did this like Ronald Reagan did,” says Stuckey. “Reagan could talk about national identity in ways that even liberals would nod their head and say, yes, I see myself there.” By contrast, Stuckey says, Trump doesn’t reach for America’s loftier values in an attempt to unify. “Trump isn’t interested in those things,” she adds, “he speaks almost exclusively to his base.”

That suits the base just fine. “All these grandiose speeches,” says Kalnins, who counts himself among those who relish that Trump does not sound like a politician. “Even Bush, who wanted to be the aw-shucks guy, it was all in there, a nice half-hour speech saying absolutely nothing. That’s what we’ve gotten away from. It scares the hell out of some people, but I personally feel that there must have been something there that helped him win, because we were on the road of the fall of the Roman Empire.”

What’s lost in Trump’s approach is any expectation of higher purpose. He makes no apology for lavishing praise on authoritarian leaders that past U.S. Presidents dealt with at arm’s length—Egypt’s Abdul Fattah al-Sisi (“somebody that’s been very close to me from the first time I met him”), the Philippines’ Rodrigo Duterte (“great relationship”) and Russia’s “strong leader” Vladimir Putin. When China’s Xi Jinping announced he would be President for life, placing 1.4 billion people deeper under government control, Trump offered congratulations.

American deference to authoritarian rulers now extends even into the nation’s capital. When Turkey’s Recep Tayyip Erdogan directed his security detail to beat protesters in full view of the press on a Washington, D.C., street on May 16, 2017, there were no consequences. Federal charges against his bodyguards were dropped in March, a day before Erdogan was scheduled to meet with Trump’s Secretary of State.

The story we tell the world is also the story we tell ourselves. Trump began June by blowing up the G-7 gathering of the world’s leading democracies by refusing to sign a joint statement endorsing “shared values of freedom, democracy, the rule of law and respect for human rights and our commitment to promote a rules-based international order.” He slapped tariffs on Canada, Mexico and the European Union, advised France to drop out of the E.U., and urged Germans to support right-wing anti-immigrant parties intent on deposing Chancellor Angela Merkel. The leaders of France and Canada replied by citing “values,” but Trump had moved on to Singapore, where he praised North Korea’s dictator Kim Jong Un, whose regime actively operates a network of gulags, as “a funny guy … very smart … his country does love him. You see the fervor.”

What values does America’s billionaire President embrace in place of the Founders’? A kind of gimlet-eyed competition. Trump purports to run the country as a business, the most meaningful metric being exports vs. imports: if you have more than your counterpart, you’re a winner, and the other guy a loser. But even in the bloodless world of accounting, “goodwill” has a place on the ledger (the left side; it’s an asset) and the U.S. may be writing down a loss. Its economy is strong. The people pitching up at its borders surely count as proof of that.

It was Alexis de Tocqueville, the French observer of the early American character, who recognized the danger of placing too much value on business, law and order at the expense of the higher values. Warning of the country’s obsession with material gain and the enforcement of order necessary to pursue it, he wrote, “A nation that asks nothing of its government but the maintenance of order is already a slave at heart.”

Which is why the test posed with Trump’s “zero tolerance” policy is as much about our future as it is about the tragedy of the families separated by its implementation. Trump may have backed down on the specific practice of family separation, but the larger question remains. In the balance between the integrity of the U.S. border with Mexico and a parent’s love for a child, where will we come down?

“Without a Border, you don’t have a Country,” the President wrote on June 19. Everyone knows that. The question is, what kind of country?