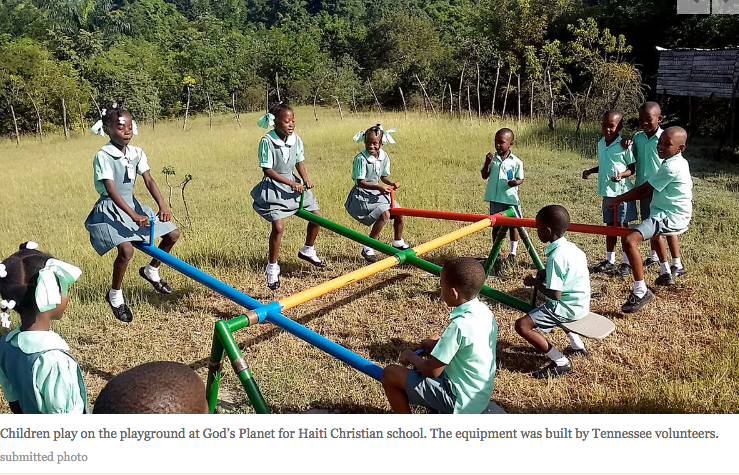 Because of God’s Planet for Haiti and its founder, Jemps Maignan, 70 preschool through fifth-grade students are receiving a Christian education, hot meals and a chance at a better life with their families.

God’s Planet for Haiti Christian school opened in Hinche, Haiti, in 2011 and started with only preschoolers. But Maignan, with help from East Tennessee, has been able to slowly expand. Maignan divides his time between his home here in Maryville and his native land of Haiti. He became a U.S. citizen in 2011.

After spending two months in the Caribbean nation, Maignan is back to report on the progress of the school, a new mission house that’s being built and plans for Christmas shoeboxes. East Tennessee resident Marie Hrom has worked tirelessly on the project for years.

“There has been a lot of progress,” Maignan said. He returned to Maryville on Feb. 1. “We started with only 16 children at the school and we now have 70. Some of these children have been with us since they were 3 and they are now 11 years old. It’s been a blessing to watch their progress.”

While in Haiti, Maignan, members of the board and community members worked on the construction of a mission house on the school property. Visiting teams can stay there and various training sessions can be held in the space. The block walls are partially up.

The annual Christmas shoebox distribution was held on Dec. 16. Shoeboxes full of gifts were provided for the 70 school children. The community was also fed and 160 more children received gifts. Maignan said 500 pounds of chicken was purchased for the party.

“We fed everybody,” Maignan said. “This is always a good day for us.”

The Christmas shoebox distribution for 2018 might look a little different. Maignan and God’s Planet for Haiti board member Eddie Holbrook Jr. want to provide shoeboxes for even more children. This will require extra help from Blount County.

“Maybe some churches or small groups could help,” Maignan said. Packing five to 10 boxes and contributing $5 per box for shipping would enable more children to receive Christmas gifts.

For many, this would be the first time to receive a gift. Their families are poor and don’t have money for anything but bare necessities. Maignan turns 40 today, but said he never received birthday or Christmas presents until he left Haiti and came here in 2006. He didn’t even get his first bicycle until he was 19.

The dream to start the ministry came to Maignan when he was 14.

He remembers starting with nothing and how others joined him in making it real. He said he takes no credit for it. “It’s God’s ministry, not mine,” he said.

It has never been God’s Planet for Haiti’s mission to go out and ask for support without first seeking the help of the families it serves.

Parents have worked on various building projects and sewn uniforms. In just a few weeks, a parent committee will begin growing papayas. They will be sold and proceeds will be placed back into the ministry.

Once that commences, more farming will begin. Maignan said he hopes to be able to grow peppers, okra, cabbage, plantains, corn and beans. There are even plans to start a small chicken house. The effort will help make if possible for the school to eventually expand and include upper grades.

Now that he’s back in Blount County, Maignan will be working to support himself and raising money to return to Haiti in a couple of months. His son, J.J., is 3 and is attending school in Haiti. Maignan is available to speak at churches or other organizations about God’s Planet for Haiti. He also welcomes anyone to go see the ministry’s work firsthand.

Visitors on this most recent trip included 31 volunteers with Remote Area Medical, which is headquartered in Rockford. The dentists, doctors and other medical personnel treated close to 1,000 patients. They even visited a women’s prison.

RAM has plans to return to Haiti in September. Students from Carson-Newman University have made many trips to Haiti, as well. Churches have sent teams and support has come from the Ogle Foundation and Radio Bible Hour.

The ministry has many needs. One class is meeting in a separate building because the school isn’t large enough. An addition needs to be completed, Maignan said. People with knowledge of farming or the desire to help this side project get off the ground would be appreciated. The mission house is only partly finished. It costs about $3,000 per month to operate the school. And the shoebox ministry will grow the more workers offer assistance.

“I live in Maryville and would love to see more support,” he said. “After Haiti, this is my hometown and I love it here. I am thankful to be in East Tennessee.”

Looking back on all that’s been accomplished makes Maignan grateful that others believe in God’s Planet for Haiti. It hasn’t been easy but it has been worth it.

“I am not going to tell people being in the ministry is easy,” Maignan said. “It is a lot of roller coaster ups and downs. But I will never get discouraged.”