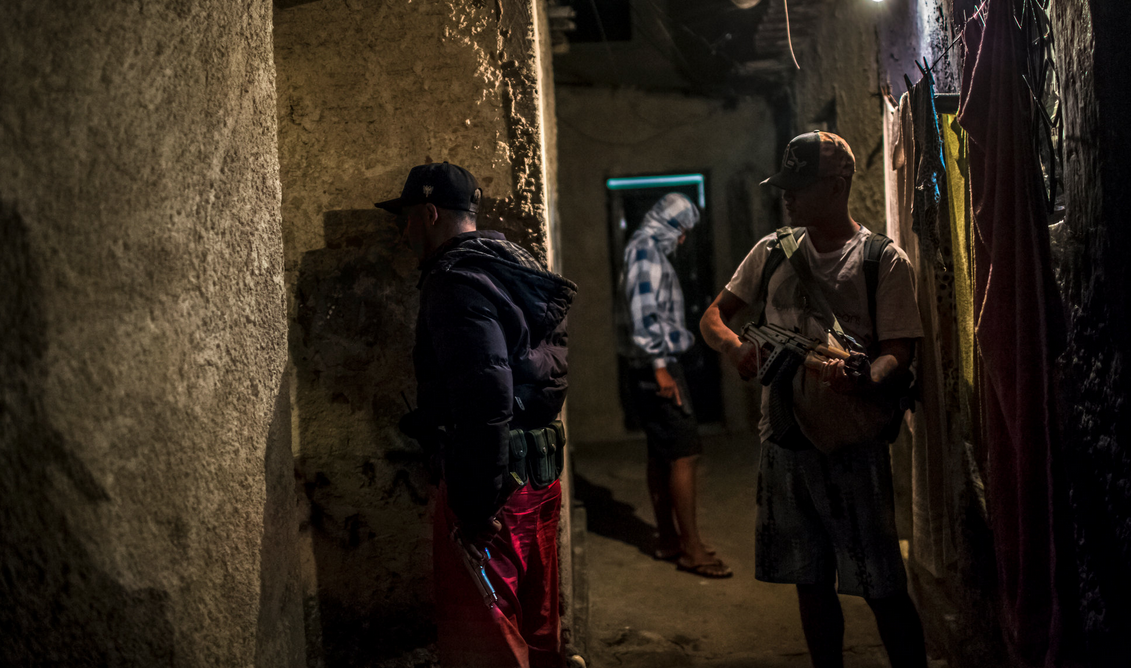 RIO DE JANEIRO — Jair Bolsonaro, Brazil’s next president, won over millions of voters by vowing to make it easier for the police to kill criminals and crush the nation’s violent gangs, often flashing a gun sign with his hands.

A “good criminal is a dead criminal,”Mr. Bolsonaro said on the campaign trail.

The type of draconian approach Mr. Bolsonaro promised has already been employed for months in Rio de Janeiro, his home state, wherethe military has overseen security operations since February. It has led to a surge in killings by the authorities — and a debate over whether the tactic is working.

Between March and September, the police and the army killed at least 922 people in the state of Rio de Janeiro, a 45 percent increase from the same period last year. Nearly one in every four people killed here since March have died at the hands of the state.

Opinion polls suggest a broad majority of people in Rio de Janeiro support the military intervention. But while reports of crimes like robberies and cargo theft have declined in the first seven months of the military takeover, the total number of violent deaths in the state has increased.

“The reduction of violence is strategic to Brazil,” said Samira Bueno, the executive director of the Brazilian Forum for Public Security, which studies violence trends. But so far, she added, “it has been discussed through myths and formulations that aren’t fact or evidence based.”

Brazilians broadly agree that drastic measures need to be taken to curb the extraordinary wave of violent crime in the country, which led to the deaths of a record 63,880 people last year.

In Rio de Janeiro state alone, more than 5,197 people have been killed this year — far more than the 3,438 civilians killedin conflict last year in Afghanistan, according to United Nations figures.

The staggering level of violence weighed heavily on voters over the weekend. Along with Mr. Bolsonaro, other politicians who had vowed to hunt down suspected criminals were rewarded at polls, setting the stage for a period of intensified bloodletting. 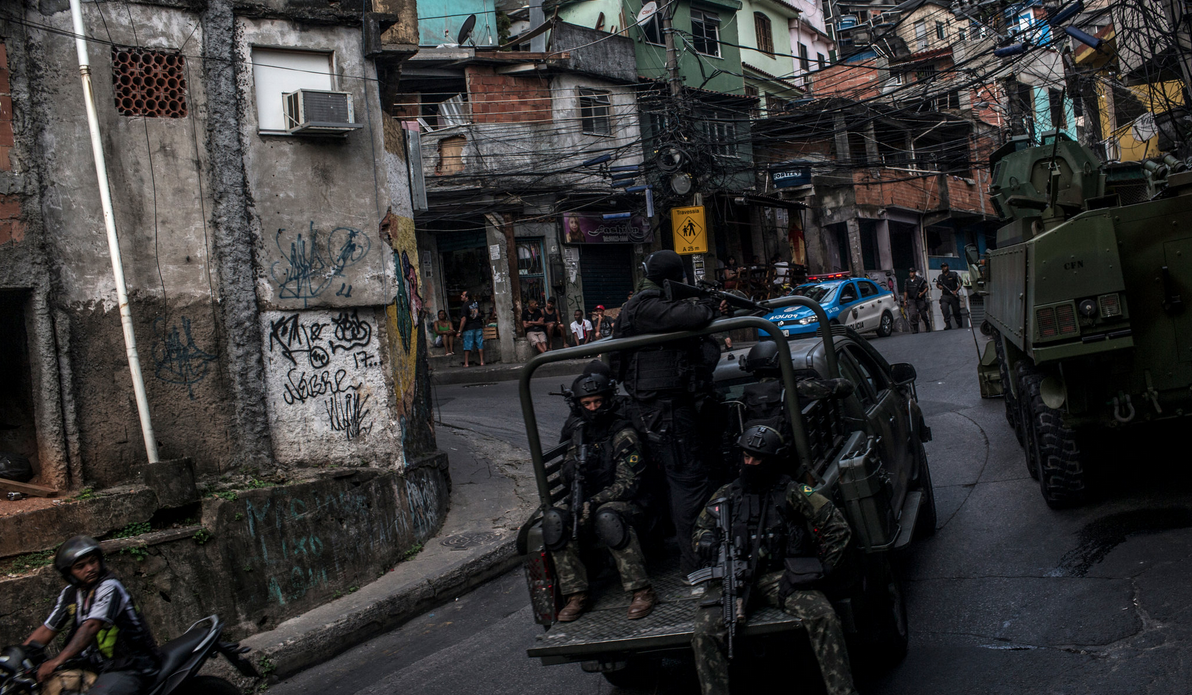 Mr. Bolsonaro, who won by a decisive margin, saidin August that police officers who gun down armed criminals with “10 or 30 shots need to be decorated, not prosecuted.”

Wilson Witzel, a former federal judge who was elected governor of Rio de Janeiro in an upset victory clinched by running as a Bolsonaro ally, put organized crime groups on warning during a speech days before the vote.

“There will be no shortage of places to send criminals,” he said. “We’ll dig graves, and as to prisons, if necessary we’ll put them on ships.”

This week,he said he favorsextending the military intervention, which is set to end in January, for an additional 10 months. And he proposed using snipers, some aboard helicopters, to gun down anyone spotted carrying a weapon in low-income urban communities known as favelas.

João Doria, a former mayor who was elected governor of São Paulo on Sunday in a tight race, vowed to raise money so that the “best lawyers” could defend police officers sued for killing suspected criminals.

Drug gangs have controlled scores of neighborhoods in several large cities in Brazil for decades, becoming the de facto authority in areas the police seldom go into. Confrontations for territorial control between rival gangs, and clashes with the security forces, greatly contributed to the record bloodshed last year. 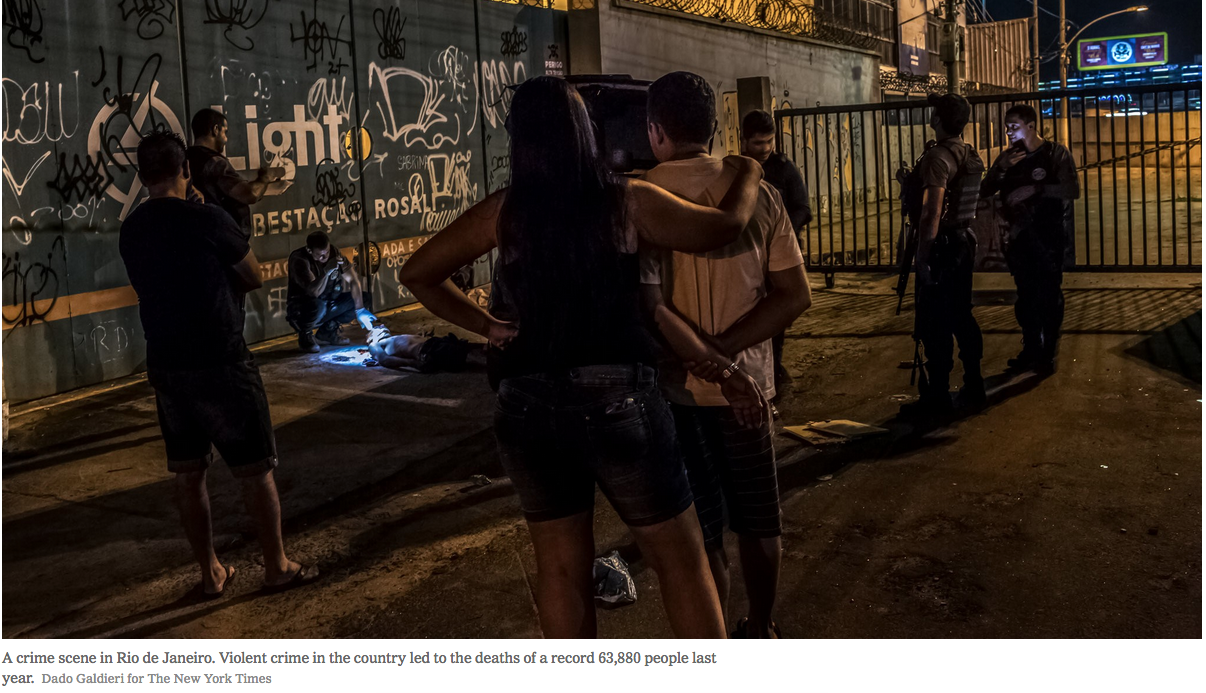 Gustavo Bebianno, a prominent member of the Bolsonaro campaign who has expressed interest in serving as his justice minister, said that Brazil’s growing violence problem will “become irreversible” unless decisive action is taken soon.

Gen. Walter Souza Braga Netto, the Army commander who was appointed to lead the military intervention in Rio de Janeiro, said the vast majority of people killed by the police are “irrational thugs.”

Asked to explain the surge in police killings since the intervention began, General Braga Netto explained that his men had trained the police in marksmanship and helped them procure and maintain equipment, leading to better accuracy.

“There was a lot of shooting, and basically no one hit anyone,” he said, referring to police operations before the intervention began. “We trained the police and they learned how to hit the target.”

Experts warn that encouraging the police to become even more lethal is unlikely to address the root causes of violence, and may well exacerbate them.

“You’re implementing the death penalty in the police’s day-to-day activities,” said Ms. Bueno. “In addition to being illegal, contrary to the constitution and immoral, it will make police officers more vulnerable.”

Much of the violence in Rio de Janeiro is driven by criminal organizations known as militias, made up of active-duty and retired police officers and military personnel acting on their own. They have become increasingly powerful in communities neglected by the state by extorting protection money from residents, operating unlicensed public transportation businesses and muscling into the drug trade.

Militias are suspected of some of the worst crimes committed in the city in recent months, including the drive-by shooting of Marielle Franco,a leftist city council member killed in March, and the killing of a judgein 2012.

Many residents in areas that have become increasingly lethal battlegrounds dread the prospect of more violence in the months ahead and question whether the military intervention will produce a lasting drop in crime.

“It puts everyone at risk,” said Sueli Oliveira, 73, who lives in the Santa Marta favela in Rio de Janeiro. She noted that some of the soldiers who have been deployed to restless favelas in recent months hail from those communities. “They’re pitting the poor against the poor,” she said.

“The armed forces can’t keep the public security of states under its guardianship indefinitely,” Gen. Braga Netto said. “We come, give support, teach them how to manage it, and then we leave.”

Retired Gen. Augusto Heleno Ribeiro Pereira, whom Mr. Bolsonaro intends to name as defense minister, said that the new president hasn’t signaled whether he wants to continue to rely heavily on the military to address urban violence.

“It’s not the mission of our dreams in the armed forces, but if it is necessary, it will continue,” Mr. Heleno said.

Adriana Beltrán, a security expert at the Washington Office on Latin America, said Latin American leaders are increasingly finding it tempting to rely on the armed forces in areas where the police are outgunned and the criminal justice system is dysfunctional. But Brazilian leaders should take note of what has happened in Mexico and Honduras, she said.

“The use of the military has not resulted in the disruption of criminal activity or dismantling of criminal networks,” Ms. Beltran said. “In many cases, gangs and criminal groups have increased their level of organization and sophistication. The cases of Mexico and Honduras demonstrate how the reliance on the military for policing can increase human rights abuses, including torture, disappearances and extrajudicial killings.”

Beyond proposing to ease the rules of engagement for the police, Mr. Bolsonaro has said that some teenagers should be prosecuted as adults for violent crimes, and he has promised to make it easier for civilians to lawfully carry weapons for self-defense.

The rise of tough-on-crime politicians effectively marks the end of the policing strategies that helped drive down violence here in Rio when they were set in motion a decade ago.

In 2008, the government established a network of so-called Pacification Police Unitsin favelas across the city in an effort to wrest territorial control from criminal groups. The government managed to reestablish control of dozens of formerly lawless areas, often without firing a shot, paving the way for promised investments in education, health and sanitation systems.

Those investments, however, never fully materialized. And the approach was abandoned amid a budget shortfall in the state, which was exacerbated by a sweeping corruption scandal.

Eliana Sousa, who heads Redes da Maré, a community organization in the Maré favela, one of the largest in Rio de Janeiro, said she fears that empowering the police to use greater violence will make matters worse.

“This shooting-down policy already exists,” she said. “What is the result? Rising violence.”

Joelma Viana, a 39-year-old single mother who lives in Chatuba da Penha, a favela in northern Rio de Janeiro, said her life was turned upside down in August during a two-day operation in her neighborhood.

Ms. Viana, a restaurant cook, said the police ransacked her home, destroyed a television set and stole a jewelry box, a watch she had bought her son for his birthday and her favorite pair of hoop earrings.

“The modest amount I have been able to save has been a product of a lot of sacrifice, so in that moment, I felt demolished,” said Ms. Viana, who filed a police report on the theft and destruction of her property. “After living here for 38 years, I have never faced something like this. I feel humiliated. I want justice.”