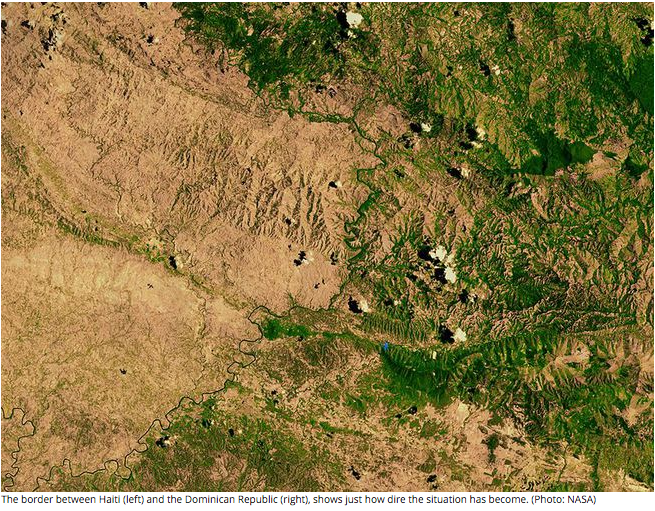 If you want to see just how destructive runaway deforestation can be to a major landmass, you need look no further than Haiti. The Caribbean nation was once covered in trees, with 60 percent of its landmass forested. Today, the country’s original primary wooded areas are almost barren. It’s an environmental catastrophe of immense proportions, reports Phys.org.

Now a new analysis of how this deforestation is affecting the animal species that once called these jungles home is equally as stark. Researchers are calling it a “mass extinction.”

“Species extinction is usually delayed until the last habitats are gone, but mass extinction appears imminent in a small number of tropical countries with low forest cover,” said S. Blair Hedges, one of the project collaborators. “And mass extinction is already happening in Haiti because of deforestation.”

The project found that Haiti’s primary forest — untouched original forest — has been depleted by 99 percent. It’s almost entirely wiped out. What remains — a few scant tracks of jungle on some of the nation’s mountains — is expected to be demolished within the next two decades, given current projections.

A study in contrasts

Perhaps the most alarming visual of the problem comes from satellite imagery along Haiti’s border with the Dominican Republic, a nation with more sustainable forestry practices. On the Dominican side, it’s lush and green. On Haiti’s, a treeless brown wasteland. The stark contrast follows the border precisely.

The world’s most deforested nation, Haiti, had only just completely deforested the first of its 50 mountains in 1986. Today, 42 of those mountains are bare-naked. This has led to soil erosion and devastating floods, such as the flooding spawned by Tropical Storm Jeanne in 2004, which killed over 3,000 people.

Endemic species, of course, also have no where left to go. Habitat loss has decimated the biodiversity once found in Haiti, and researchers fear that scores of reptiles, amphibians and other vertebrates are, or are soon to be, driven to extinction.