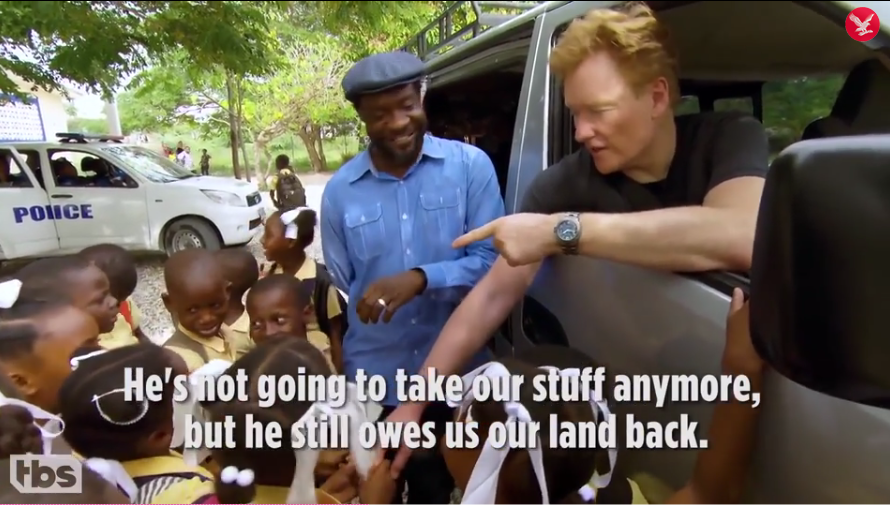 A Haitian schoolgirl has been hailed the nation’s “next President” after footage of her criticising America’s aid legacy attracted an outpouring of praise online.

The child, who has not been identified, told American TV host Conan O’Brien that Haiti did not need the help of America who “took our riches”.

“They say that Haiti is a place, that every time the US occupied it, they took a piece of our land. They took our riches,” she said.

O’Brien was speaking with a group of schoolchildren as part of his upcoming “Conan Without Borders” TBS special based in Haiti — more than eight years after an earthquake ravaged the Caribbean nation.

But when he asked the children, “Maybe Americans need to help Haiti put things back, is that right?”, the young girl replied: “No! It’s not true we don’t need the help of the US. They’re going to come here and take our stuff.”

O’Brien promised he would not take anything, but the girl is heard replying: “He’s not going to take our stuff anymore, but he still owes us our land back.”

The TV host hailed the girl as Haiti’s “next President”, adding: “She is not wrong that America in history has not been good to Haiti, but there’s still a chance for America to be better to Haiti.”

The video was first brought to light on Twitter by user Nerissa Nefeteri, who said: “This little girl is my president.”

Nova Artemis responded, saying: “She seems to know more about history and foreign relations than most adults in the US.”

Another user, Nabeel Zazaian, said: “She understands the effects of imperialism by the white man. She’s my hero.”

The footage was revealed just weeks after Donald Trump reportedly referred to the nation as one of a handful of “s******* countries”.

Several attendees at an Oval Office meeting on immigration earlier in the month said the US President wondered aloud why the country took in immigrants from Haiti, El Salvador, and African countries, asking: “Why are we having all these people from s***hole countries come here?”

The White House did not initially deny the report, but after a bipartisan backlash – in which many accused the President of being racist – Mr Trump fired back, denying the remarks.