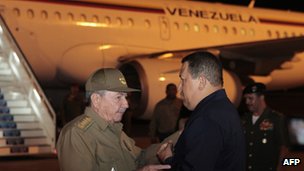 Mr Chavez, 57, had surgery in Cuba last month to remove a tumour in his pelvic area after a recurrence of cancer first treated last year.

The Venezuelan leader’s illness has cast doubt on his ability to campaign for re-election in October.

Mr Chavez arrived in Havana a day before Pope Benedict XVI, who begins a three-day visit there on Monday.

He said he had had his first session of radiotherapy shortly after arriving in Cuba and that there had been no problems of any kind.

After completing five sessions, he plans to return to Venezuela for a three-day break on Thursday, before returning to Cuba for the next round.

Before he left Venezuela, Mr Chavez told a televised cabinet meeting that he had decided to begin the treatment immediately, on the recommendation of medical and political advisers.

He said the treatment would complement the surgery he had a month ago and that he was recovering well from it.

Given the nature of the treatment, he said he would be “coming and going” and that it was also possible some therapy sessions might take place in Venezuela.

SpeculationLast year, the Venezuelan leader had surgery and four rounds of chemotherapy in Cuba, after a baseball-sized growth was detected in his pelvic region.

He has never revealed the exact nature of his cancer, fuelling speculation that his health may be worse than officially stated.

He has told Venezuelans to ignore the rumours which he says are aimed at destabilising the country.