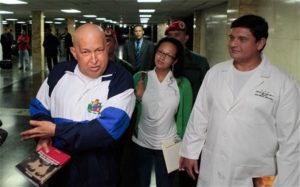 Venezuelan President Hugo Chavez has returned home after 11 days in Cuba where he underwent further radiation treatment for cancer.

He had surgery in February and has been shuttling back and forth between Caracas and Havana for treatment.

Mr Chavez, 57, on Monday dismissed rumours that he had died as part of a psychological war against him.

He is seeking re-election in October, when he will face opposition candidate Henrique Capriles.

State television showed images of Mr Chavez smiling and talking to officials after he arrived in Caracas early on Thursday.

He had travelled to Cuba on 14 April for further radiotherapy for a second tumour in his pelvic region.

Mr Chavez is expected to fly back to Havana soon for more treatment.

President Chavez, who has been in power since 1999, has said that despite his health problems he is determined to win October’s presidential election.