Nicolas Maduro (left) and Henrique Capriles have been trading accusations

BBC-Both sides in the stand-off over Sunday’s presidential election in Venezuela have called on their supporters to attend rival rallies.

The official count indicates he won 50.8% of votes to opposition candidate Henrique Capriles’s 49.0%.

The Electoral Council has rejected opposition demands for a recount.

The election was called after the death on 5 March of President Hugo Chavez.

Mr Chavez had chosen Mr Maduro, his vice-president, as his successor before he travelled to Cuba for cancer surgery.

The opposition rallied behind Henrique Capriles, the governor of Miranda state, who had lost to Mr Chavez by more than 10 percentage points in presidential elections in October.

It is the narrowness of his latest defeat, a difference of 265,000 votes out of 14.9 million cast according to official figures, which has led to the latest stand-off between Mr Capriles and Mr Maduro.

Mr Capriles said he would not accept the result until a manual recount had been carried out “vote by vote”.

“We believe we have won the elections, and the other camp also think they won,” he said. “We have a right to demand a recount.” 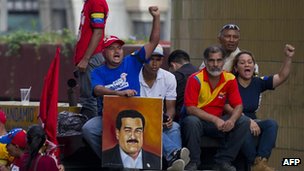 Supporters of Mr Maduro celebrated throughout the day and night

His demand has been backed by the United States and the Organisation of American States.

“A recount would mean going back to the manual counting of votes, which is very vulnerable,” she said praising Venezuela’s automated voting system, in which there are two records of every vote cast, one recorded by the voting machine and another printed receipt.

Mr Capriles said the rush to declare the official results was suspicious.

“What are they trying to hide?”, he asked ahead of the official announcement on Monday. “If you declare yourself [the winner], then you’re an illegitimate president,” he said, addressing Mr Maduro.

Following a ceremony in which Ms Lucena handed Mr Maduro the certified results of the election, clashes broke out between supporters of Mr Capriles and police in the capital Caracas. 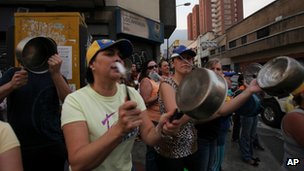 Across the country, thousands of opposition supporters followed Mr Capriles’s call for a “cacerolazo”, the banging of pans and pots in protest at the rejection of the recount.

“I’m here because there was no recount, and today Maduro declared himself president,” one woman banging a pan in the east of the capital, Caracas, said.

“What’s the hurry, if he’s so sure he’s won, why not recount the votes?”, she asked.

Writing on his Twitter account, Mr Capriles said he hoped “those pots and pans will be heard across Venezuela!”.

In some areas of the capital, the sound of the “cacerolazo” rivalled that of the celebratory fireworks let off by Mr Maduro’s supporters.

Mr Maduro accused the opposition of trying “to undo a democratic majority’s will, what they are doing is carrying out, or pushing for, a coup d’etat”.

He also said that opposition supporters had burned down offices of the United Socialist Party.

“Is this the Venezuela you are trying to promote, losing candidate?” he asked Mr Capriles.

Rival rallies are scheduled to take place in Caracas on Tuesday.

Mr Maduro is due to be sworn in on 19 April and serve until January 2019 to complete the six-year term that Mr Chavez would have begun in January.