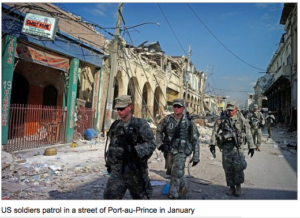 PORT-AU-PRINCE — The US military has reduced its number of troops in Haiti to 13,000 from a post-quake high of some 20,000 because the need has decreased, General Douglas Fraser said on Saturday.

The commander also said the Haitian government was taking back control of the Port-au-Prince airport during daylight hours, with the United States having assumed operations there immediately after the quake.

“There are roughly 13,000 US military men and women supporting the efforts here in Haiti,” Fraser said during a visit a month after the earthquake that killed more than 200,000 people.

“The international aid and relief efforts have improved and increased in Haiti and we’ve seen an ability to transition those capabilities to other needs around the world.”

He called it “a transition of immediate relief capability to an enduring capacity here in Haiti.”

Fraser would not, however, provide specifics on how long he expected US troops to remain in Haiti, saying it would depend on needs in the country, where more than one million have been left homeless after the quake.