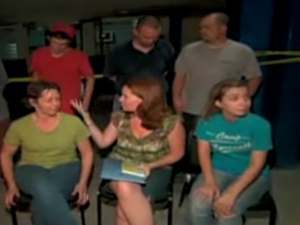 PORT-AU-PRINCE, Haiti — A man who provided legal assistance to 10 jailed U.S. missionaries and who may be wanted for human trafficking in El Salvador was not known to the Americans’ church group before their arrest, a relative said Saturday.

For that reason and because the adviser could not by law represent them in Haiti, lawyers for the missionaries argued, his legal troubles should have no bearing on whether the Baptists are released provisionally, as a judge has recommended.

Sean Lankford told The Associated Press that Jorge Puello first contacted relatives of the Americans by calling their church, Central Valley Baptist in Meridian, Idaho, after they were arrested on Jan. 29 trying to take 33 children out of Haiti.

They thought Puello, a yarmulke-wearing Jew from the Dominican Republic, was a good Samaritan and had no reason to doubt his intentions, said Lankford, whose wife and daughter are among the detained.

“He helped us find the lawyer we have now. He helped us gather evidence. Before him, we really were having a hard time finding anyone at all” to represent the missionaries in neighboring Haiti, said Lankford.

Puello never asked for money for himself but “was going to help us to pay the other attorneys. He was the guy who was going to hand money to lawyers,” Lankford added in a phone interview Saturday.

“He even took a small plane into Haiti at one point and he didn’t want to be reimbursed at all,” Lankford said.

He would not say how much relatives paid Puello, and he said it was his understanding that Puello had no relation to any of the missionaries before they were arrested.

The Americans said they were on a humanitarian mission, rescuing desperate victims of Haiti’s catastrophic Jan. 12 earthquake. They had leased a hotel in the Dominican beach resort of Cabarate where they were setting up an orphanage.

The deputy investigations director of El Salvador’s police, Howard Augusto Cotto, told reporters Friday that he was seeking fingerprints for Puello to determine whether he is the 32-year-old Salvadoran named in an Interpol arrest warrant for allegedly running a sex trafficking ring that lured women and girls from the Caribbean and Central America into prostitution with bogus offers of modeling jobs.

A photo of the wanted man, Jorge Torres Orellana, bears a striking resemblance to Puello, who on Wednesday visited the Haitian judge hearing the case in his chambers in Port-au-Prince.

Cotto told The Associated Press “the possibility is high” that Torres and Puello are the same man.

The Haitian judge, Bernard Saint-Vil, told the AP on Thursday that he was recommending the Americans be provisionally released. He said he expected to issue a decision next week.

Puello readily answered calls from the AP until The New York Times reported Thursday night that he might be the wanted sex trafficker. He has since Friday refused to answer phone calls.

The Times quoted Puello as denying any connection to trafficking and saying he had never been to El Salvador.

The paper also quoted Saint-Vil as saying the Puello situation could delay his decision on whether to release the Americans, most of who are from an Idaho church group. Saint-Vil could not be located for comment. He did not respond to repeated telephone messages.

On Saturday, the Dominican police chief, Rafael Guzman, issued a statement saying Puello had no criminal record there but was under investigation. He is in apparent violation of Dominican law for failing to obtain a license, said Jose Parra, vice president of the Dominican Lawyers Association.

Lawyers for the missionaries, meanwhile, argued Saturday that Puello deceived their clients and that his legal predicament should have no bearing on their fate.

“The Puello case has no relation to this one,” said Aviol Fleurant, who was hired last week to represent nine of the 10 Americans. “If Puello is wanted in El Salvador, that’s another case.

The attorney for the 10th American, Jim Allen of Amarillo, Texas, said relatives of the jailed missionaries erred by appearing to entrust Puello blindly.

“The families, unfortunately, did not check his background, did not do due diligence,” said the lawyer, Gary Lissade.

Fleurant, meanwhile, said he had only received a small part of the fee he was promised by the Americans for defending them against child kidnapping charges filed on Feb. 4.

Neither he nor Lankford would name his promised fee, and Fleurant refused to directly accuse Puello of absconding with the bulk of it.

“I don’t want complications for my clients, because I love them,” he added. “I feel that I am (also) a victim.”