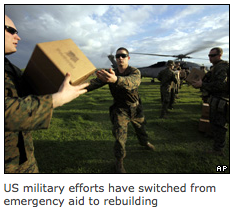 The US military will end its disaster relief mission in Haiti at the beginning of June, nearly six months after the massive earthquake struck.

There are currently 2,200 US troops in the country, down from a peak of 22,000 in February when large numbers were despatched to help the aid effort.

Some 500 National Guard troops and reservists will remain in Haiti to help aid workers, a US commander said.

January’s quake killed up to 230,000 people and left one million homeless.

In the weeks following the disaster, the US sent around 22,000 military personnel to Haiti, some 7,000 on the ground and the rest on ships offshore.

“I expect us to – on or about 1 June – to be able to stand down the joint task force,” said Lt Gen Ken Keen, who ended his stint as head of the operation on Sunday.

He said the military could step back mainly because of “the increasing capacity of non-government organisations that are really running much of the humanitarian efforts within the country”.

Some 500 members of the Louisiana National Guard will arrive in Haiti before June and stay on in Haiti until September to help with rebuilding efforts.

In the immediate aftermath, US troops were involved in emergency relief operations.

Now they are helping move people from makeshift camps to safer locations as the rainy season nears.

The scale of the US deployment provoked some criticism that aid deliveries were delayed while troops were rushed in.

Gen Keen said he felt, given the scale of the disaster, that the military operations went well and saved lives.

But he said lessons should be learned, allowing the military to assess needs in a disaster more quickly and improve logistics and co-ordination.

Anticipating challenges sooner was key, Gen Keen said, “such like what are you going to do with 1,000 homeless Haitians as we developed camps?

“These camps that have developed in Port-au-Prince area, nearly 1,300, according to the UN, developed spontaneously. They were not, obviously, set up and organised in any fashion.”