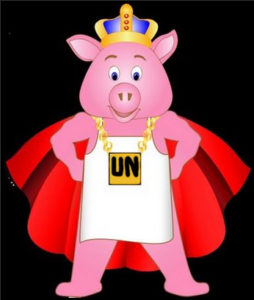 The United Nations has quietly upped this year’s peacekeeping budget for earthquake-shattered Haiti to $732.4 million, with two-thirds of that amount going for the salary, perks and upkeep of its own personnel, not residents of the devastated island

The United Nations has quietly upped this year’s peacekeeping budget for earthquake-shattered Haiti to $732.4 million, with two-thirds of that amount going for the salary, perks and upkeep of its own personnel, not residents of the devastated island.

The world organization plans to spend the money on an expanded force of some 12,675 soldiers and police, plus some 479 international staffers, 669 international contract personnel, and 1,300 local workers, just for the 12 months ending June 30, 2010.

Some $495.8 million goes for salaries, benefits, hazard pay, mandatory R&R allowances and upkeep for the peacekeepers and their international staff support. Only about $33.9 million, or 4.6 percent, of that salary total is going to what the U.N. calls “national staff” attached to the peacekeeping effort.

Presumably, the budget also includes at least part of some $10 million that the U.N. has spent on renting two passenger vessels, the Sea Voyager (known to some U.N. staffers as the “Love Boat“) and the Ola Esmeralda, for a minimum of 90 days each, as highly subsidized housing for some of its peacekeepers and humanitarian staff. The tab for the two vessels, which offer catered food, linen service and comfortable staterooms and lounges, is about $112,500 per day.

Under a cost-sharing formula, the U.S. pays a 27 percent share of the entire $732.4 million peacekeeping tab for Haiti during this 12 month period, or about $197.7 million.

That concern rose sharply about a month ago, when U.N. Secretary General Ban Ki-moon’s office issued an updated peacekeeping estimate that used a $700 million figure strictly as a placeholder for the final Haiti post-quake number.

The new figures take some of the uncertainty out of that estimate, but even so, the U.N. was taking no chances of raising concerns higher with its new tally; rather than take a new vote on the expanded peacekeeper budget, the U.N. Secretariat simply issued its revised tally as an extension of the previous $611 million allotment it had voted for Haiti.

The Haitian peacekeeping budget is relatively unique among U.N. efforts, because there was no civil war or widespread bloodletting to inspire the original peacekeeping force, which arrived in 2004. Instead, the mission has mainly been intended to bolster political order in a society crushed by hurricanes, political turbulence, and grinding misery.

The revised peacekeeping tab is over and above the roughly $15 billion in short- and long-term aid that the international community — led by the U.S. and European Union — pledged to Haiti at an international donor’s conference last month.

It is also over and above the $773 million in humanitarian aid raised from donor nations and private citizens in a “flash” appeal in the days after the Jan. 12 earthquake — which is about half the total hoped for by the United Nations Office for the Coordination of Humanitarian Affairs when it raised the appeal.

Moreover, the revised Haiti peacekeeping budget only covers a period that ends in about 10 more weeks — on June 30, 2010 — at which time, Ban’s office will have to formulate another peacekeeping estimate for the stricken island, not to mention the remainder of its global peacekeeping effort.

Given the temporary nature of this year’s sudden 20 percent boost in Haiti peacekeeping costs, there is some possibility that next year’s budget will mark a decrease from the $732.4 million figure.

Since the U.N. installed peacekeepers on the island in 2004, however, the budgeted cost of peacekeeping has roughly doubled, from an original $372.8 million