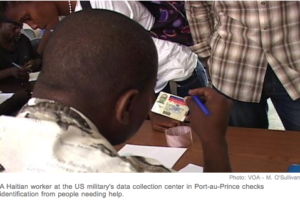 The U.S. Army has set up a data collection center in Port-au-Prince, Haiti, to assess the needs of residents in the aftermath of the massive earthquake January 12. Thousands who come daily are in desperate need of water, food and work.

Ten thousand people show up here most days, at a building of the Haitian agriculture ministry, which the U.S. Army is using temporarily as a data collection and operations center.

Soldiers outside the gate try to keep the crowds orderly, separating men and women into separate lines.   Small numbers are allowed to enter through the iron gates every few minutes.

One woman says she is desperate for help. “We came from under the rubble.  We have many injuries.  Our houses have been destroyed and all of my relatives have been killed,” she says.

U.S Army Sergeant First Class Brandon Lemmons says he passes along each day’s information to his commanders, and they use it to map out their relief strategies. “The main concern, number one, everybody had more than anything, buy number, was food and water; number two would be medical.  Number three would be shelter, depending on a typical day,” he says.

He says other concerns include price gouging for essentials like baby food and rice.

As  the army collects information, many Haitians come here in the hope of finding a job.

“We don’t have any money at all.  We have lost everything.  We are not able to work any more,” says a woman who once worked for a U.S. military contractor and hopes to find similar work. “I was in charge of 50 employees in the laundry section.”

Thirty Haitians have been hired to help operate this center.  Sergeant Lemmons says the military is doing what it can to give jobs to local people, to fill the needs of this and other American units in Haiti. “A lot of them need interpreters.  A lot of them need laborers for their base.  Some of them want more skilled people to come in, like the masons.  We may be able to use them later.   So we may not be able to give them a job right off the bat, but the longer we stay, the more people we’re going to need and hopefully the more people we can help,” says Lemmons.

When the center closes in late afternoon, thousands will be turned away and face the prospect of coming back tomorrow.  Sergeant Lemmons says the process so far has been orderly, but people are desperate and the need is great.

I was a little befuddled about the ending to this article. Here was have a life or death disaster on our hands and this operation seems to have some sort of office hour basis for its basis. I would think that the Americans should be operating this office for so long as someone is standing in line, even if it means working three shifts.

These people who were left outside, as the office closed, may have walked 10 or 20 miles – perhaps more, to reach the place. This situation is very hard on someone who is on the verge of starvation, with small children.

Not serving the needs of those who wait is a tremendous hardship on those who are turned away.