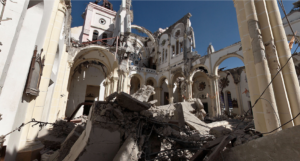 By SHAILA DEWAN and LIZ ROBBINS

MIAMI — Days after the United States military suspended medical evacuations of critically injured earthquake victims from Haiti, officials in Washington continued to search for ways to resume the flights on Saturday, including looking to states beyond Florida, which has taken in most of the patients.

The military flights — usually C-130s carrying Haitians with spinal cord injuries, burns and other serious wounds — ended on Wednesday and even as officials worked through the weekend to get them started again, there was confusion over why the flights were halted in the first place.

“There has been no policy position from anyone to suspend evacuee flights,” said Tommy Vietor, a White House spokesman. “This situation arose as we started to run out of room.”

Florida officials, including the governor, offered other reasons.

John Cherry, the external affairs director of Florida’s Division of Emergency Management, said that the state was willing to take the patients, but that the flights stopped after Gov. Charlie Crist asked the federal government to coordinate flight plans and to ensure that the state would eventually be reimbursed for assisting the federal effort.

“There’s a lack of coordinated response from the federal government on this,” Mr. Cherry said in a telephone interview on Saturday. “We don’t know who’s in charge. They take it up their chain and it seems like things are going to a black hole. We’re saying, ‘let’s coordinate.’”

Military officials said on Friday that the flights were stopped because of a dispute between Florida hospitals about the payment for patient care, and the fact that the hospitals did not have capacity. But the military appeared to back away from even that assertion on Saturday.

“For us to do our mission, it’s obvious we have to have a destination to fly them to,” said Capt. Kevin Aandahl, a spokesman for the United States Transportation Commandsaid on Saturday. “The capability exists, it’s just a matter of getting all the right people on the chain all lined up.”

It was not clear who or what agency exactly was responsible for the interruption of flights, or the chain of events that led to the decision. Sterling Ivey, a spokesman for Mr. Crist, said the governor’s request for federal help might have caused “confusion.”

But in a statement released on Saturday, Mr. Crist emphasized what he said was the contribution his state continued to make to the Haitian earthquake victims.

“Last night, between 60 and 80 Haitian orphans arrived at Miami International Airport,” Mr. Crist said. “Let me be clear — at no time has Florida closed our doors to those impacted by the earthquake in Haiti.”

He added, “This state remains committed to this effort, knowing that many Floridians are working 20-hour shifts to meet the enormous challenge.”

Hospitals in Florida have treated more than 500 earthquake victims so far, the military said, including an infant who was pulled out of the rubble with a fractured skull and ribs. Other states have also taken patients, and those flights have been suspended as well, the officials said.

Florida officials said part of the problem was that their medical officials were not always advised ahead of time of patient conditions, making it difficult to prepare for care.

“They began coming in in a pretty rapid rate,” Mr. Cherry said. “We began to see that these people were coming in with critical care that may require longer term in hospitals. We’ve been continually asking the federal government, ‘what can we expect in the future?”

Part of that expectation was a guarantee of financial reimbursement, he said. “Eighteen days into this we have no guarantee of anything,” Mr. Cherry said.

Flordia officials also expressed reservations about their medical facilities in South Florida, where most of the injured were brought, being able to care for its residents and visitors, especially in the week leading up to the Super Bowl in Miami. But the officials said there were ample hospital beds elsewhere in the state.

The suspension of the medical flights could be catastrophic for patients, said Dr. Barth A. Green, the a founder of Project Medishare for Haiti, a nonprofit group affiliated with the University of Miami’s Miller School of Medicine that had been evacuating about two dozen patients a day.

“People are dying in Haiti because they can’t get out,” Dr. Green said.

United States government agencies in Haiti, however, said they were working with aid groups in trying to expand capacity at both the United States Navy hospital ship Comfort, docked offshore, and at facilities throughout the country that were not damaged. Only the most critically ill are being airlifted.

According to the White House, there have been 435 earthquake patients airlifted to the United States, 18,500 patients treated by Health and Human Services personnel on the ground in Haiti, and 19,000 patients treated at the Comfort, with 635 patients currently there.

Mr. Ivey said that the Florida Department of Health reported the state’s hospitals had treated 526 people: 413 in South Florida, 76 in the Orlando area and 37 in the Tampa area.

Mr. Crist’s request to the federal government did not indicate how much the medical care was costing his state, but the number and complexity of the cases could put the total in the millions of dollars. The expenditure comes at a time when the state is suffering economically and Mr. Crist, a Republican, is locked in a tough primary battle for his party’s nomination for face Mel Martinez, the Democratic incumbent, in this year’s Senate race.

“Recently, we learned that plans were under way to move between 30 to 50 critically ill patients a day for an indefinite period of time,” Mr. Crist wrote in a letter to Kathleen Sebelius, the secretary of health and human services. “Florida does not have the capacity to support such an operation.”

A spokeswoman for the Department of Health and Human Services said the decision to suspend the flights had been made by the military, not the federal health department. A military spokesman said that the military had ended the flights because hospitals were becoming unwilling to take patients.

“The places they were being taken, without being specific, were not willing to continue to receive those patients without a different arrangement being worked out by the government to pay for the care,” said Maj. James Lowe, the deputy chief of public affairs for the transportation command.

Florida officials, meanwhile, said the state’s hospitals had not refused to take more patients. Jeanne Eckes-Roper, the health and medical chairwoman of the domestic security task force for the South Florida region — where the Super Bowl will be played on Feb. 7 — said she had requested only that new patients be taken to other areas of the state, like Tampa.

The Health and Human Services spokeswoman, Gretchen Michael, who works for the assistant secretary for preparedness and response, said the agency was reviewing Mr. Crist’s request for financial assistance. The request would involve activating the National Disaster Medical System, which is usually used in domestic disasters and which pays for victims’ care.

Some of the patients being airlifted from Haiti are American citizens and some are insured or eligible for insurance. But Haitians who are not legal residents of the United States can qualify for Medicaid only if they are given so-called humanitarian parole — in which someone is allowed into the United States temporarily because of an emergency — by United States Citizenship and Immigration Services.

Only 34 people have been given humanitarian parole for medical reasons, said Matthew Chandler, a spokesman for the Department of Homeland Security. The National Disaster Medical System, if activated, would cover the costs of caring for patients regardless of their legal status.

Some hospitals have made their own arrangements to accommodate victims of the earthquake, which occurred on Jan. 12. Jackson Health System, the public hospital system in Miami, treated 117 patients, 6 of whom were still in critical condition, said Jennifer Piedra, a spokeswoman. The system has established the Haiti’s Children Fund to cover the costs of treating pediatric earthquake victims.

In the aftermath of the earthquake, Haitian medical facilities were quickly overwhelmed. Since then, medical help has come in the form of mobile hospitals and other aid. Major Lowe said that as medical care had become available in Haiti, the need for the flights had declined significantly. But Dr. Green and nonprofit groups with a presence in Haiti said the need for evacuations remained dire.

“Right now we have in the queue dozens of paraplegics, burn victims and other patients that need to be evacuated,” Dr. Green said. “And other facilities are asking us to coordinate the evacuation of their patients.”

A spokeswoman for Partners in Health, a Boston charity with doctors and nurses in Haiti, said the group had a backlog of patients, many with head, spine or pelvic injuries, who needed surgery that could not be performed there.

Major Lowe said patients could still be evacuated in private planes, but Dr. Green said medically equipped planes were very expensive and generally could carry only one or two patients.

Federal officials could not provide the total number of earthquake patients airlifted to the United States, but Florida seemed to have received the bulk of them.

In his letter, Mr. Crist outlined his state’s efforts to support the rescue effort, helping both the healthy and the sick streaming into the state. “Florida’s health care system is quickly reaching saturation,” he wrote.

There once was a saying….”You are your brother’s keeper…”

Of course, that was in another era. Florida’s Governor Charlie Cris is playing with the English language when he says he hasn’t stopped the flow of desperately needy people who need treatment to save their lives. By delay, he will save Florida millions since the people will simply, and conveniently die….then there will be no one to pressure the American system.