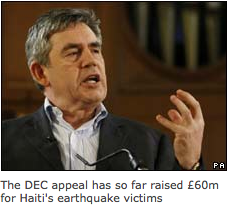 The government has purchased all of the UK’s available corrugated iron sheets to provide shelters for victims of the Haiti earthquake.

Gordon Brown announced the move, which should help some 2,000 families, at a charity poetry reading for Haiti in London on Saturday.

They will be shipped to the stricken country next week.

Between 100,000 and 200,000 people are thought to have died in the devastating earthquake which struck the island of Haiti on 12 January.

Up to 1.5 million people have been left homeless and humanitarian organisations fear for their safety with the hurricane season only a few months away.

So far, the UK Disasters Emergency Committee’s (DEC) appeal has raised £60m for the country.

Mr Brown said supplies of corrugated iron from the UK would be used to provide Haitians with “the hurricane-proof shelter that they so urgently need”.

The materials weigh more than 55 tons and will be transported on RFA Largs Bay along with other urgent relief supplies.

The Department for International Development said in a statement it had “worked with our suppliers to purchase as many of these sheets as could be manufactured to the required standard in the time available” before the ship sails.

The government said it was “considerably cheaper” to ship iron from the UK than purchase it in Haiti’s neighbouring country, the Dominican Republic.

The prime minister announced the move as he told the Poetry Live fundraiser on Saturday that helping Haiti was “the test of our humanity”.

The event at Methodist Central Hall in Westminster was organised by Poet Laureate Carol Ann Duffy and featured readings from 22 of the country’s leading poets, including Andrew Motion and Gillian Clarke.

Christopher Reid, who won the Costa Book of the Year Award earlier this week with his collection of poems A Scattering, also took part.

Duffy told the audience the world owed a “duty of care” to the population of Haiti and must do something “more ample, more generous, more human” to help.

Former poet laureate Motion said: “There’s an idea lurking somewhere in the background that poetry feeds itself by not being very practical, and in all sorts of ways that’s true.

“But if people will pay good money to hear poetry being read then of course it’s a good idea.”

The prime minister, who was accompanied by his wife Sarah, thanked those taking part in the event.

He said: “People can’t survive by words alone, or shelter in verse or place their children in the cradle of a sonnet. But the role of a poet is the extraordinary extent of your empathy.

“You know that poetry does what ordinary words can never do themselves alone. Instead of narrowing our view of the word, poetry broadens and deepens our understanding.”

The DFID said it was also giving £1m in funding for the International Organisation for Migration and £400,000 for relief agency ACTED to provide shelter and sanitation for earthquake survivors.