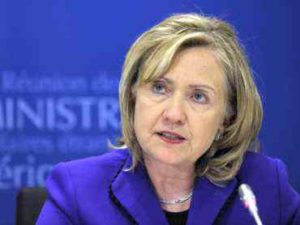 Clinton on visit to Haiti, to meet leading candidates

* Clinton: aid to Haiti “steady but not adequate to task” (Adds protest at airport, paragraphs 11-13, visit to cholera clinic, paragraph 21

Clinton arrived in Port-au-Prince for talks with outgoing Haitian President Rene Preval and leading presidential candidates on a visit overshadowed by the unfolding political crisis in Egypt.

The U.S. secretary of state said she was delivering the message that Washington wants to see Haitian authorities enact recommendations by Organization of American States experts that revise disputed preliminary results from chaotic elections held on Nov. 28 in the poor, volatile country.

OAS experts, citing widespread irregularities in voting tallies from Nov. 28, have recommended that presidential candidate and popular musician Michel Martelly be included in a second-round runoff vote in March in place of government-backed candidate Jude Celestin.

Opposition matriarch Mirlande Manigat is already confirmed through to the runoff.

“We’ve made it very clear we support the OAS recommendations and we would like to see those acted on,” Clinton told reporters earlier on her plane in Washington just before it took off for the trip to Port-au-Prince.

“We want to see the voices and votes of the Haitian people acknowledged and recognized,” she said at Port-au-Prince airport on her arrival. She said this would help bolster Haiti’s reconstruction from a devastating 2010 earthquake.

As well as the United States, the United Nations and major western donors like France and Britain, along with the European Union, have made clear they also support the OAS recommendation for the runoff line-up.

Despite the OAS report and international pressure, Celestin, a government technocrat and protege of outgoing Haitian President Rene Preval, has not formally withdrawn from the race despite urging from his own INITE coalition to do so.

Haiti’s Provisional Electoral Council has said it will announce on Wednesday the definitive results from the confused elections. The preliminary results announced last month triggered street riots by Martelly’s supporters, because Celestin was placed narrowly ahead of their candidate.

A small group of about 20 protesters at the airport on Sunday carried signs in English reading “Secretary Clinton, Haiti did not have free and fair elections.”
“We are protesting for our right to a good election. We call for a cancellation of the election masquerade,” said one protester, Vanel Louis-Paul, 34.

The electoral council so far has given no clear indication that it will follow the OAS recommendations.

This has prolonged uncertainty over the elections in the Western Hemisphere’s poorest country.

The second-round runoff is scheduled to be held on March 20. There have been fears the unrest will plunge Haiti back into political turmoil and also put at risk donor aid.

Asked if U.S. aid to Haiti might be reduced if the dispute is not resolved, Clinton said: “We’re not talking about any of that. We have a deep commitment to the Haitian people.”

She acknowledged, however, that the international humanitarian operation that has backed Haiti since the massive Jan. 12, 2010 earthquake that killed more than 300,000 people has not been able to deliver all the assistance required.

“It’s been steady but not adequate to the task that we are confronting,” Clinton said. “We want to see it expedited, accelerated.” Her husband, former President Bill Clinton, is one of the coordinators of Haiti’s post-quake rebuilding.

“There is so much to be done. We have an enormous task still ahead of us,” she added later in Port-au-Prince.

Haiti’s recovery from the earthquake has been complicated by a cholera epidemic that has killed more than 4,000 people.

Clinton visited a makeshift cholera treatment center run by a U.S.-based medical charity, where she saw patients resting on cots and chatted with health workers. To avoid contagion and spreading the disease, she walked through a basin of bleach solution and washed her hands on the way in and out.

Outgoing President Preval’s formal mandate ends on Feb. 7, and there has been debate whether he should stay on to hand over to an elected successor or whether a provisional government should take over while the runoff is held.

“There are timing concerns, there are issues of continuing (governance) and how that could be structured and that’s what I’m going to be discussing,” Clinton said.

The United States, a big contributor of aid funds for Haiti’s post-quake reconstruction, has previously warned this support may be at risk if the OAS recommendation is not heeded. Washington has also revoked the U.S. entry visas of several Haitians linked to INITE and Celestin’s campaign.

(Additional reporting by Allyn Gaestel; Writing by Pascal Fletcher; Editing by Will Dunham)

For two terms Bill Clinton did nothing for Haiti and now Hillary Clinton is expecting the nation to commit suicide.

The elections – FOR PRESIDENT, CHAMBER OF DEPUTIES AND SENATE – were so badly flawed that they must be canceled.

Everyone has overlooked the fraud that saw UNITE/INITE go from one or two possible wins, in the first round, to a clean sweep. All of this happened while we were focused upon the criminal action in the presidential vote count.

Four flawed and fraudulent polls, coordinated by Chamber of Commerce President, Reginald Boulos, gave false indications of popularity, so Preval’s choice – Mirlande Manigat – would end up at the top of the polls. He gave her money, home improvements, and armored vehicle, palace security and the promise that INITE would support her in the run-off.

The fact that things became confused, when Jude Celestin really tried to win, does not change the underlying facts.

The polls were respected by the international community because they were coordinated by the President of the Haitian Chamber of Commerce!! Who could be more trustworthy??

Well now, Boulos got a 100 vehicle purchase, for his car agency, from Celestin/Preval. And he got his brother’s passport back, clearing the challenge of dual citizenship that barred him from the senate.

TH REAL POPULARITY WINNERS WERE JEAN HENRY CEANT, CHARLES BAKER AND MICHEL MARTELLY – NOT MANIGAT, CELESTIN AND MARTELLY…MANIGAT AND CELESTIN HAD ABOUT 5% EACH, IN THE RAL POLL.

The only solution is Preval’s departure, followed by the appointment of a new CEP, news elections, properly coordinated and supervised….to guarantee a result that sees the Haitian people’s wishes honored.

To do otherwise will guarantee another disaster in the future.