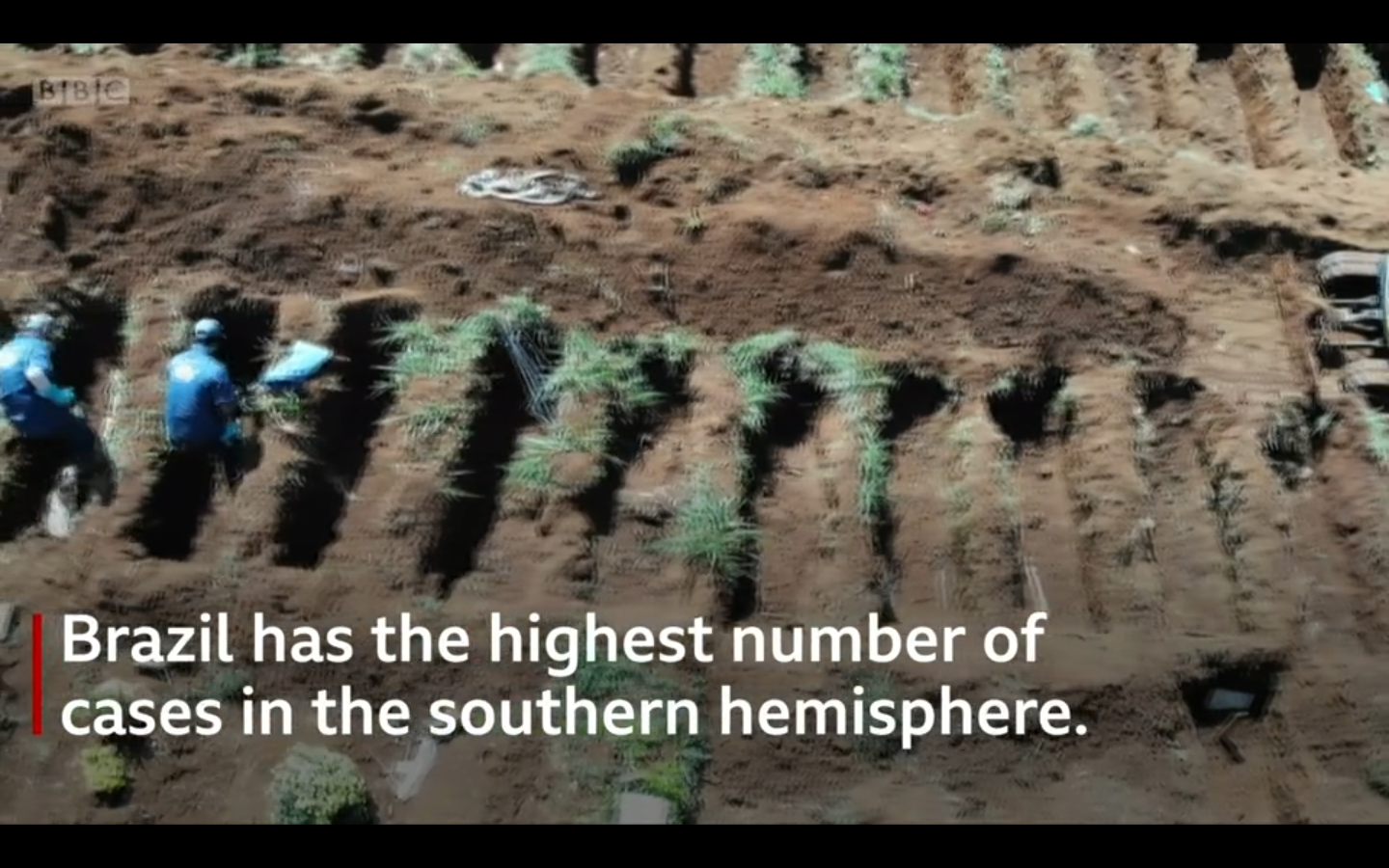 Families are strictly limited to an hour with the coffin in the chapel of rest and no more than 10 people are allowed in. All in the name of curbing the spread of Covid-19.

For gravediggers and undertakers, the rules have become even tighter. When they prepare a burial, they’re handed a piece of paper – on the top right, there’s a code. D3 means a suspected or confirmed coronavirus death. It also means they have to wear full protective suits, masks and gloves.

Workers at Vila Formosa, in the Brazilian city of São Paulo, say they’re turning over more graves than normal. On an average day, they bury about 40 bodies at the cemetery. The weekend before last it, that figure was about 60. 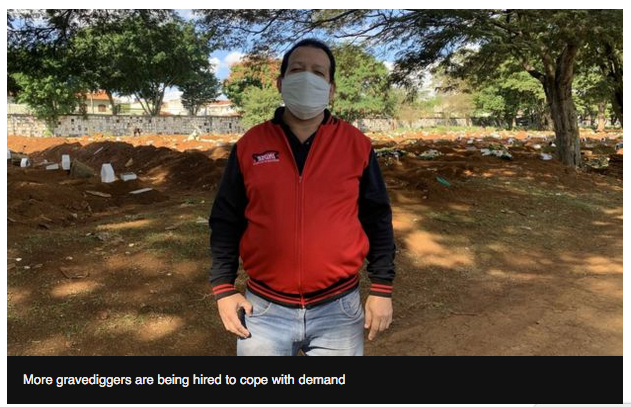 The municipality bought 5,000 body bags and they’re hiring more people, too,” says gravedigger Manuel Pereira. But they’re bracing themselves for the weeks ahead.

Brazil’s health ministry says the peak is not expected in the country until May or June.

In one corner of the cemetery, a coffin is removed from a hearse and six undertakers in white overalls walk over fresh red soil to a newly-dug grave.

Maria Odete died at the age of 77 from suspected coronavirus. The family have come wearing masks and observing social distancing, a few hugs are given to those who need them, and just a short round of applause follows.

“I’m really sad and worried about the situation,” says Sandro Nunes, her son. He never imagined saying goodbye to his mother like this.

“I wasn’t taking it too seriously before. I thought it was the media stirring things up. Then, when it happened to our family, we understood the severity of it.”

Maria Odete’s family won’t find out for sure whether or not she had Covid-19 until at least two weeks after her burial. This is a pattern that’s being repeated every day across Brazil. 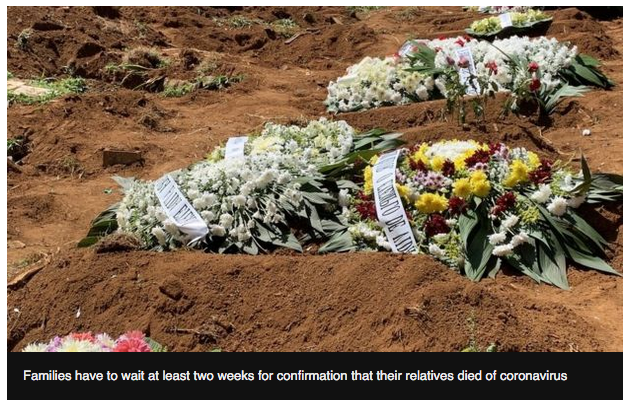 The country’s laboratories have a bottleneck of tens of thousands of tests. They just don’t have the capacity at the moment.

But Dr Carolina Lazari, medical chief of the molecular biology laboratory at Latin America’s biggest hospital, Hospital das Clínicas, says “the ministry numbers are a photograph of the past”.

Brazil tests just under 300 people for every million inhabitants. In the US, for instance, this figure stands at 9,482 per million.

One of the challenges is that the country struggles to import sufficient quantities of ingredients for testing. The whole world is competing for supplies to tackle the pandemic. 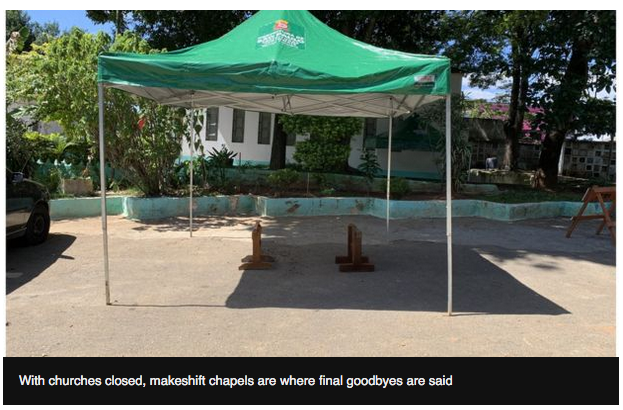 “All we see is the tip of the iceberg,” says Dr Lazari. “In Brazil we only test the patients that go to hospital and stay there – the more severe cases – but we don’t know how the virus is circulating in the population.”

Figures from Brazil’s Civil Registry show that there was a near 10% rise in the number of people dying of acute respiratory syndrome in March compared with last year. There’s concern that victims of coronavirus were not included in nationwide statistics, which underscores accusations that Brazil is under-reporting. 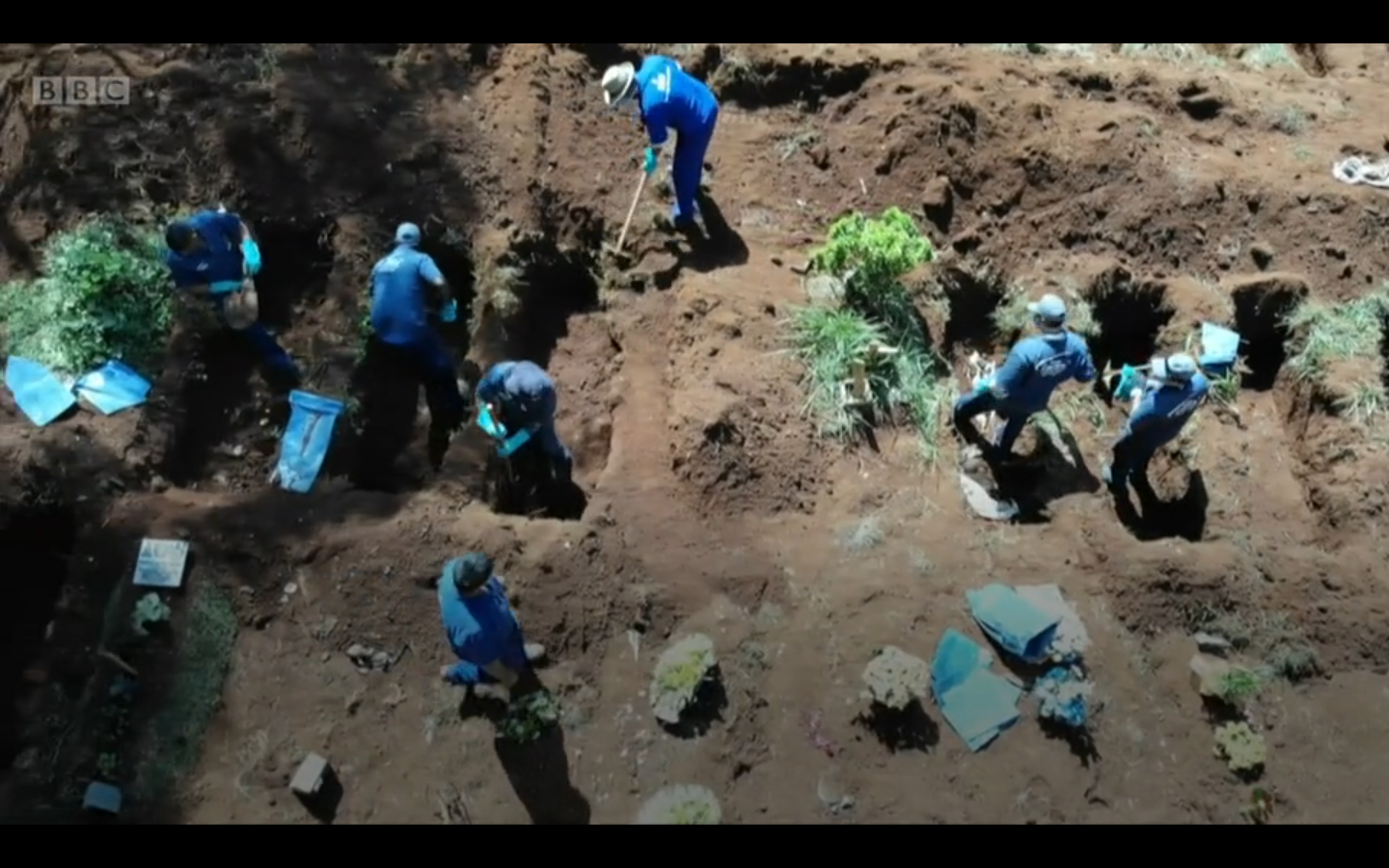 Daniel Tabak, an oncologist and haematologist behind a campaign to increase testing at the laboratory at Rio Federal University, thinks the country was slow in preparing for the virus. Brazil’s first case was detected in January – a month before the world famous carnival, but the street parties hosting millions went ahead without any concern.

“For a while, there was this idea that Brazil wouldn’t be affected,” he says. “There was a lack of urgency and preparation in buying kits in a more proactive manner.”

Without the ability to test on a mass scale, experts point to social distancing as a way to curb the spread of the virus. Although most states have heeded the health ministry’s advice of social distancing, Brazil’s president continues to jeer at the severity of coronavirus and wants people to return to work.

Last weekend, Jair Bolsonaro met crowds of supporters in the capital, even wiping his nose before shaking an elderly lady’s hand. 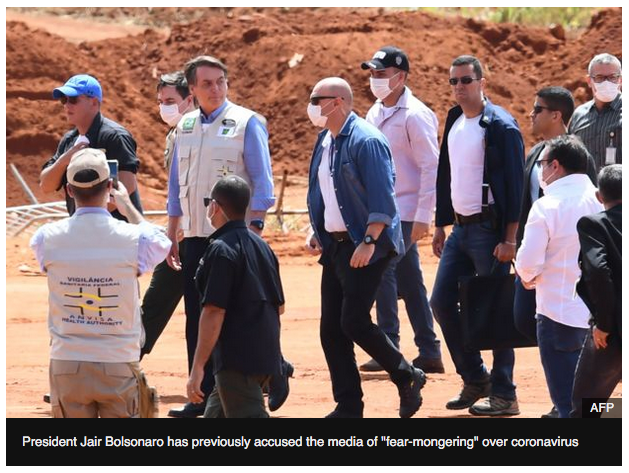 “[It] takes away the credibility of our health ministry,” says Dr Lazari. “We have to think the same way and try and take the same measures to slow the spread of the virus.”

With little data available, some scientists are modelling estimates to get an idea of the real number of cases. According one group of Brazilian researchers, there could be as many as 313,000 cases in Brazil – 15 times the official number.

“People ask me when we are going to reach the top, when can people relax,” says Domingos Alves, part of the team and a member of the Faculty of Medicine of the University of São Paulo.

“But anyone even guessing is being hasty. We can’t estimate how the curve is going up. Imagine you climbing a mountain but you can’t see the peak. And that’s why it’s important to look at the rise. Will we be similar to the US, to Italy? We don’t know – not with the data that’s available.” 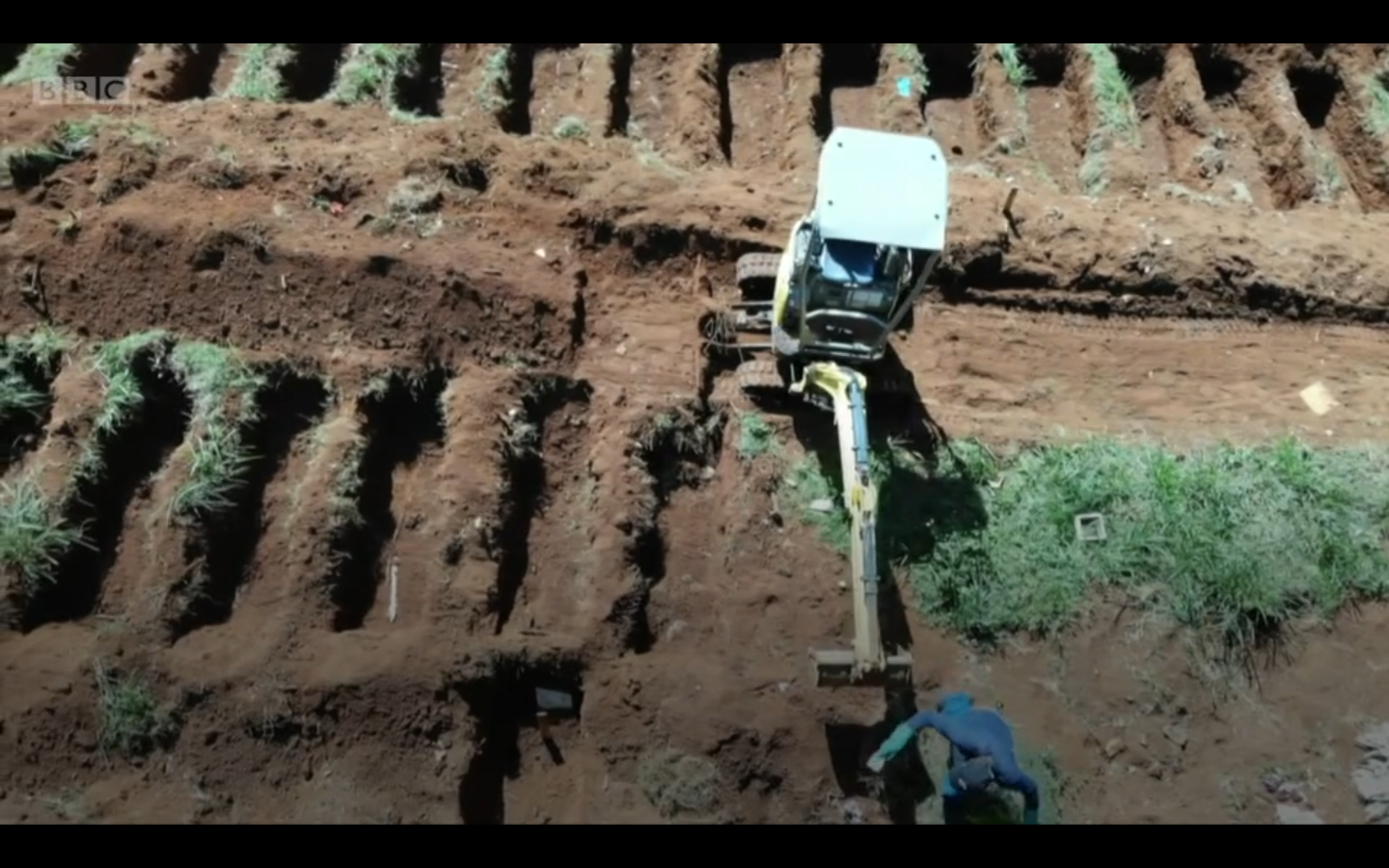 Where is Brazil headed to?

Daniel Tabak says India could perhaps offer a better insight into how the virus will behave in Brazil.

“In a population with 13 million people living in favelas, where there will be no systematic testing, how can we make projections?” he says. “It’s a highly infectious disease that will get to crowded communities which still fight for basics such as water and soap.”

He thinks there’s only one way to read the statistics.

“Brazil has not exploded because this has simply not been recorded.” 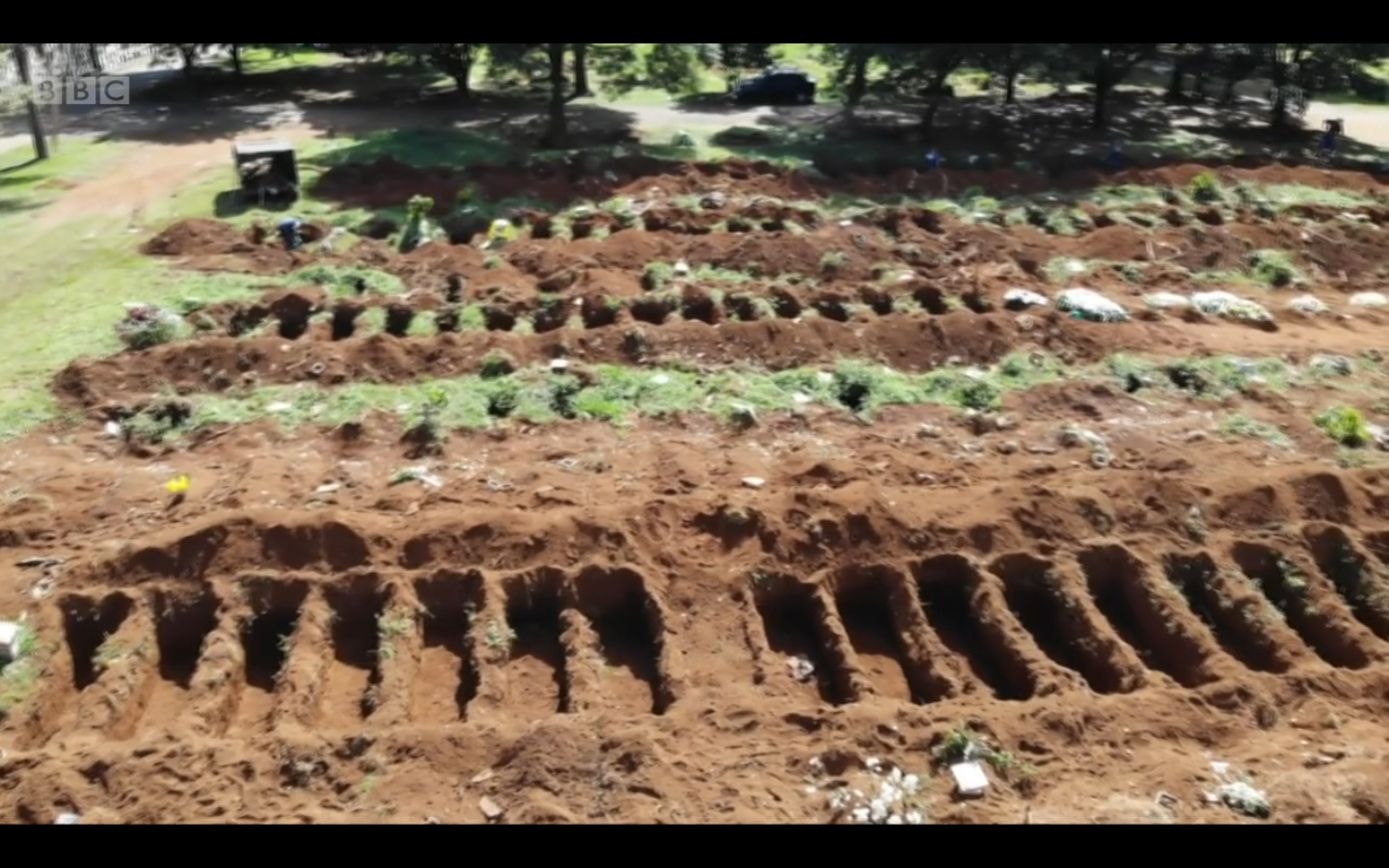