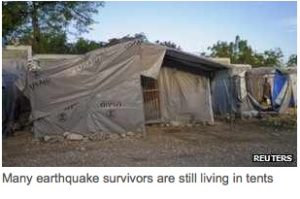 The United Nations in Haiti has warned that hundreds of thousands of quake victims are at risk due to an aid shortfall.

The UN humanitarian coordinator, Nigel Fisher, says the lack of money has led to reduced services in camps for those displaced by the earthquake in 2010.

He said this underfunding threatened the victims’ “very existence” and could reverse steps taken to combat cholera.

In a statement, Mr Fisher said Haiti had received only about half of the $382m in aid demanded last year.

He said international donors had so far provided less than 10% of the $231m called for this year.

Mr Fisher said the underfunding “threatens to reverse gains achieved in the fight against cholera through the promotion of sanitary and hygiene practices”.

“It threatens the very existence of hundreds of thousands of [displaced people] living in camps.”

“Almost half a million people still live in camps, exposed to cholera outbreaks and risks of flooding that will be exacerbated by the upcoming rainy and hurricane season from May to November,” he said.

The earthquake on 12 January 2010 devastated the Haitian capital, Port-au-Prince, and many other towns, killing up to 300,000 people.

While international donors have pledged billions of dollars to help rebuild homes and infrastructure, much of the aid has not materialised and reconstruction has been slow.

Added to this, a cholera outbreak which many Haitians blame on UN peacekeepers in the country has killed more than 7,000 since October 2010.