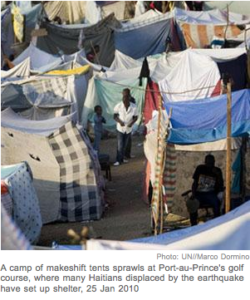 UN: Crucial to House Homeless in Haiti Before Rains Begin

The International Organization for Migration estimates more than one million earthquake victims in Haiti are in acute need of emergency shelter.

International aid agencies say it is absolutely crucial to provide shelter for hundreds of thousands of people in Haiti made homeless by the earthquake before the rainy and hurricane season begins in April.  The International Organization for Migration, which is leading this effort, says aid agencies are looking for sites where camps for internally displaced people can be set up.

The International Organization for Migration estimates more than one million earthquake victims in Haiti are in acute need of emergency shelter.  It says the vast majority of them are in the capital.

IOM says it is in the process of finalizing the first organized settlement for some 3,500 displaced people in the Port-au-Prince neighborhood of Tabarre.

The agency agrees this first camp is inadequate for the immense needs.  But, notes it is a start.  IOM spokesman, Jean-Philippe Chauzy, says aid agencies are under pressure to speed up their shelter operation before the rainy and hurricane seasons begin in a few months.

He says there are not enough tents in the country.  So, until they arrive, IOM and its partners are distributing tarpaulins and plastic sheets to improve shelter conditions for those made homeless by the earthquake.

“Tents are the first response, but they are not a panacea,” said Chauzy. “Far from it, because we all know that with the rainy season, the hurricane season, we need also to think of temporary shelters, of permanent solid shelters.”

“So, we are, at the moment, obviously, doing our best to provide as many tents, plastic sheeting as we can because there is a  need.  But, at the same time, we have got a strategy basically to develop more permanent shelters,” he added.

Chauzy describes this as a very complex operation.  He says appropriate sites have to be identified for establishing a camp before the tents and other temporary shelters can be erected.

He says this immediately poses a big problem because of the scarcity of open spaces in and near Port-au-Prince, which are buried under rubble.

Once a site is located, he says the ground has to be leveled, electricity, water and sanitation systems have to be installed and other basic infrastructure must be put in place.

IOM spokesman Chauzy says aid agencies do not want to construct massive tent cities housing 100,000 or more people.  He says the intention is to set up many smaller camps – each to provide shelter for a maximum of 10,000 internally displaced people.