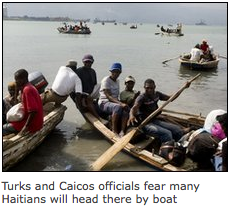 More than 100 Haitians have been picked up off the Turks and Caicos Islands by marine police after trying to flee quake-stricken Haiti in a rickety boat.

The authorities in the British overseas territory said the group was being held in a sports complex rather than being sent straight back.

An estimated 1.5m Haitians are homeless following the 12 January earthquake.

Some of the Haitians on the boat stopped on Wednesday were as young as eight, the Turks & Caicos Weekly News reports.

Marine patrols were recently stepped up, the newspaper reports, because of fears that large numbers of Haitians might seek to leave their devastated country for the territory.

Mr Correa, the temporary head of the Union of South American Nations (Unasur), is reported by AFP news agency as saying the regional bloc would lend its support as Haiti rebuilds.

“This is a tragedy, a humanitarian tragedy,” he was quoted by AFP as saying.

“In this phase of reconstruction we are going to need a lot of resources – human, material, financial.”

He was also expected to meet Ecuadorean troops with the UN peacekeeping mission in Haiti during his visit.

The BBC’s Huw Williams in Port-au-Prince says a new relief programme is under way, with the United Nations paying Haitians to help clear rubble from the streets.

A UN spokesman said thousands of local people were being paid up to $20 (£14) a day under the Cash for Work programme, giving them a guaranteed wage for the foreseeable future, our correspondent reports.

Earlier, the acting head of the UN mission in Haiti, Edmond Mulet, told the BBC reconstruction would take several decades and that all of Haiti’s recent development had been undone.

He said the logistics of the relief effort were a nightmare, with Haiti’s inadequate infrastructure destroyed and a shortage of vehicles.

Reconstruction was not starting at zero, but “below zero”, Mr Mulet said.

The UN has estimated that 75% of the capital, Port Au Prince, will have to be rebuilt. Salvage crews have begun to clear the rubble.

Meanwhile, Mr Mulet said, areas around Port-au-Prince are being prepared for the creation of tented settlements for the homeless currently living in makeshift camps.

He said 200,000 heavy-duty tents had been ordered to cope with Haiti’s rainy season, which typically begins in May, and its hurricane season, which is expected to start around June.