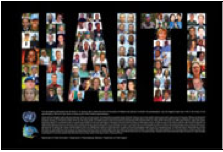 28 May 2010 – Amelia Shaw lost colleagues and friends in an instant on 12 January when an earthquake toppled the headquarters of the United Nations peacekeeping mission in Haiti. Now she and other UN staffers are completing an ambitious project that they hope will go some way to memorializing the event – both the calamity itself, and the heroic efforts in the days and nights that followed.

Thousands of photographs, film clips, audio files and other documents taken in the aftermath of the disaster have been compiled and indexed by the United Nations on a digital archive that is now available to the public through a website.

The Haiti Oral History and Visual Archive as it is officially known is the result of a decision by the Department of Peacekeeping Operations (DPKO) to record for posterity what Ms. Shaw notes sadly was a “historic event for the Organization – definitely by far its largest loss of life.”

It includes interviews with rescue workers, images from the disaster zone and raw footage of UN staff trying to help Haiti get back on its feet.

“The archive aims to take advantage of all the digital media… we have and bring them together in one collection [so as] to capture and preserve the efforts of the UN and its staff,” Ms. Shaw explains.

Registering 7.0 on the Richter scale, the quake killed an estimated 200,000 people, including 101 UN staff, most of them working for the UN peacekeeping mission known as MINUSTAH.

Ms. Shaw, a television producer, was four-and-a-half months pregnant and standing in her office in an annex to MINUSTAH’s headquarters building in the capital, Port-au-Prince, when she felt the building suddenly shake just before 5 p.m. on 12 January. She looked outside, expecting to see a large truck go past.

But the rumbling got much worse, and Ms. Shaw and a nearby cameraman were soon thrown to the ground by the force of the quake. While they were eventually able to crawl to safety, many colleagues in the main building were not so fortunate.

“We spent the next 10 to 12 hours at the site. Everybody was trying to pull the rocks away and help out. It was just the longest night,” she recalls.

With the help of four other staff members and three volunteers, as well as technical assistance, Ms. Shaw has spent the months since the quake painstakingly arranging the archive so that users can easily find the materials they are searching for. The archive went online yesterday, two days before the International Day of UN Peacekeepers is marked. In the months ahead, more items – the tally is already up to around 7,000 – will be labelled and indexed and made available.

“This has been a very meaningful project for me as it has everything to do with the fact that I was there,” says Ms. Shaw. “Many of the people that I lost were friends. This has given me a wonderful opportunity to feel like I was doing something concrete and getting something positive out of the tragedy.”

News Tracker: past stories on this issue