As official reports surface of accused drug lord Christopher Coke’s escape from his barricaded Kingston, Jamaica neighborhood, where Jamaican authorities have been attempting to arrest him for extradition to the U.S., ABC News has learned that a U.S. government report refers to Rene Preval’s associate, Jamaican Prime Minister Bruce Golding as a “criminal affiliate” of Coke. 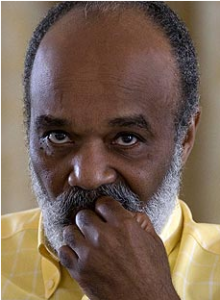 Police patrol on May 24, 2010 in Kingston, Jamaica after two police officers were killed after coming under attack amid spreading unrest despite a state of emergency imposed by the government. Six police were wounded in the incident on Sunday after police responded to a call for help 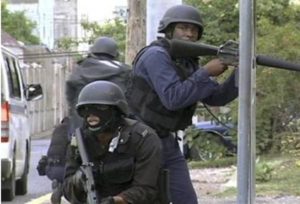 from a female motorist, the Jamaican police force’s Constabulary Communications Network said. It said the two police officers died after being taken to the University of the West Indies Hospital. Jamaica’s prime minister vowed tough action against a frenzy of gang violence in Kingston, imposing a state of emergency to curb armed supporters of an alleged druglord sought by the United States.

Golding, who led resistance to Coke’s extradition before public opinion forced him to reverse himself, is described in a document read to ABC News as a “known criminal affiliate” of Christopher “Dudus” Coke. According to official U.S. accounts , Golding’s Jamaican Labour Party (JLP) was voted into power through “Coke’s murderous and strong-arm tactics.”

Recently, Golding and other senior Jamaican officials have been electronically intercepted talking to Coke inside his fortified redoubt, US authorities say.

The major police action to capture Coke began Monday morning. On Tuesday, U.S. authorities said they believed Coke had escaped through a ring of hundreds of cops and soldiers who had surrounded the West Kingston neighborhood of Tivoli Gardens. Jamaican and US authorities report that Coke may have slipped through police lines and escaped into one of two adjoining areas, either Denham Town or Jones Town.

By Monday night, Coke’s gun-toting supporters had taken control of the Kingston Public Hospital, and the hospital’s one surgeon has been treating at least 14 Coke loyalists.

Jamaican police are reporting that 30 people — 26 civilians and four members of security forces — have died during firefights in West Kingston as authorities attempt to capture Coke.

ABC News has learned that authorities believe at least 15 alleged gangsters have been slain. Police and soldiers have been doing battle with the alleged drug lord’s heavily armed supporters and outside mercenaries that Jamaican authorities say Coke has hired. U.S. authorities say some of the mercenaries are believed to be Haitian. These mercenaries are drawn from  more than 60 major Haitian gang-leaders who escaped  sweeps by MINUSTAH forces since Preval became president. Jamaica provided sanctuary to Preval’s more notorious associates and now they provide an armed element in support of Prime Minister Golding. 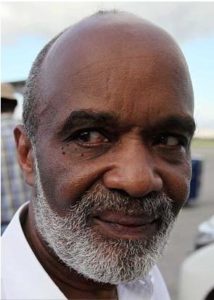 Observers also noted Haitian President Rene Preval’s  long-term association with Jamaica. Preval purchased a $2.5 million dollar property here, during his first term as president. There is a major traffic in drugs and weapons between Jamaica and Haiti.   Most of the weapons, used by the Jamaican terrorists have been traced to Haitian sources the report states.

In addition to the Kingston Hospital gunshot victims, the University of the West Indies (UWI) Hospital has treated 21 gunshot victims. Six of those – five civilians and one soldier – have died.

The island’s Minister of National Security Dwight Nelson has alerted a third hospital, Andrews Hospital, to expect wounded and the National Blood Transfusion Service has issued an appeal to the public to donate blood. An emergency operations center has been activated to coordinate health sector responses as well as hospital security.

The US Department of Justice has listed Coke among the “world’s most dangerous narcotics kingpins.”

He is accused since the 1990s of leading an international gang known as “The Shower Posse” – so named not for their cleanliness but for showering opponents with bullets. Preval’s gang leaders have been absorbed into the leadership of the “Shower Posse.”.