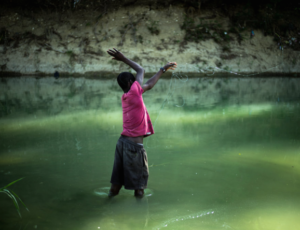 A young Haitian fishing in the Latem River, known to be contaminated. The country is still struggling to stem a cholera epidemic. Ian Willms for The New York TimeCHAPOTEAU, Haiti — For three years, the United Nations has refused to address whether its peacekeepers brought a deadly strain of cholera to Haiti, insisting instead that it was more important to help the country stanch the disease once and for all.

CHAPOTEAU, Haiti — For three years, the United Nations has refused to address whether its peacekeepers brought a deadly strain of cholera to Haiti, insisting instead that it was more important to help the country stanch the disease once and for all.

But on that score, it is still very far behind. In some ways, Haiti is even less equipped to tackle cholera than it was three years ago.

The United Nations raised barely a fourth of the $38 million it needed last year to provide lifesaving supplies, including the most basic, like water purification tablets. Clinics have run short of oral rehydration salts to treat the debilitating diarrhea that accompanies the disease. Some treatment centers in the countryside have shut down as the aid groups that ran them have moved on to other crises. And a growing share of patients are dying after they finally reach hospitals, according to the United Nations’ own assessments.

Josilia Fils-Aime, 11, who lives in this village on an isolated spit of land near the Artibonite River, where the epidemic first began, knows these shortcomings all too well. Her family had run out of water purification tablets, and she drank water from what must have been a polluted stream nearby.

“I felt dizzy and sick,” the girl said. She was struck by sudden vomiting and diarrhea. Doctors diagnosed cholera.

Her predicament has multiplied across Haiti, which has had the most cholera cases in the world for three years in a row.

The United Nations has yet to raise the $5 million necessary to vaccinate 600,000 vulnerable people right away — as the rainy season approaches and the threat of waterborne illnesses like cholera looms — let alone the $2 billion that it promised to raise from rich countries to build Haiti’s water and sanitation infrastructure, which public health experts say is vital to ridding the country of cholera.

Pedro Medrano Rojas, the United Nations secretary general’s newly appointed envoy for the cholera outbreak, attributed the shortfall to global “donor fatigue” in the face of other humanitarian crises.

“Had we had the resources it would have been different,” Mr. Medrano said. “It’s not expensive. No one should be dying from cholera.”

The United Nations is essential to solving the problem because, like many of the country’s institutions since the January 2010 earthquake, Haiti’s own health care system remains in shambles. Clean drinking water and sanitation remain as scarce as when the epidemic began. And where international nonprofit groups, along with the government, once operated 120 cholera treatment centers across the nation, the number has shrunk to barely 40 as aid groups have pulled out.

Perhaps that most troubling measure of all is the rising percentage of cholera patients who die in the treatment facilities that remain. As the United Nations mission said in its report to the Security Council in March, “That reflects weaknesses in the capacity of health centers to provide timely and adequate health services to patients affected by cholera and the longer travel time required for treatment as a result of the closure of many cholera treatment centers.”

Josilia Fils-Aime, for instance, most likely survived because Partners in Health, a nonprofit that has worked in Haiti for years, opened a satellite clinic near her home. The next closest cholera treatment center would have required a two-hour trek, including a boat ride.

“In any other country, you would declare it a humanitarian disaster,” said Dr. Louise Ivers, a health policy adviser for Partners in Health. “What’s going to happen when the rainy season starts?”

By Mr. Medrano’s estimates, as many as 40,000 people could become infected once the clouds break and the rivers swell.

Haiti’s cholera outbreak has spread to three countries across the region: the Dominican Republic, Cuba and Mexico. The fatality rates have been much lower in those countries, which have far better public health systems; it is a measure of how easy it can be to treat the disease.

Forensic studies, including one ordered by the United Nations, have concluded that the bacteria found in Haiti is an Asian strain common in Nepal, where hundreds of United Nations peacekeepers in Haiti came from. The forensic studies have also linked the spread of cholera to a flawed sanitation system at the Nepalese peacekeeper base, which contaminated a river tributary that many Haitians used for drinking and bathing water. The wastewater from the peacekeeping base, now occupied by Uruguayans, still flows into that stream, though the United Nations insists it is now treated.

The United Nations has maintained a steely silence about whether it is responsible for importing the disease to Haiti, where cholera had not been previously recorded.

In a stinging report in March, Gustavo Gallon, a special envoy for human rights in Haiti, took the United Nations to task for its failure to explain how the disease had spread to Haiti and who was responsible. He urged the United Nations to establish a commission “to enable damages to be recorded, corresponding benefits or compensation to be paid, the persons responsible to be identified, the epidemic to be stopped and other measures to be implemented.”

Three class-action lawsuits have been filed against the United Nations in American courts, asserting it was responsible for the outbreak. Responding for the United Nations, the United States attorney in Manhattan, Preet Bharara, said in early March that he believed the United Nations Charter rendered the organization “absolutely immune from legal process and suit absent an express waiver.”

All three cases seek hefty compensation for victims. That is not only a costly proposition, but it also could set a daunting precedent for future peacekeeping missions around the world, Mr. Medrano cautioned.

To assuage the Haitian government, whose officials have sharply urged the United Nations to take “moral responsibility” for the outbreak, Mr. Medrano has agreed to be part of a high-level government committee to discuss how to address the needs of cholera victims, an issue that Mr. Medrano said the government has been “adamant” about.

“We would like to see how we can assist those communities, those persons who are affected by cholera,” he said.

The committee has not yet held its first meeting.

“I’m not so sure we will use the word ‘compensation,’ ” Mr. Medrano added.

Officials have often trumpeted their progress — the Haitian government last year declared the decline in cases as a sign that the epidemic was “under control,” despite disagreement from international doctors — which has sometimes undermined the sense of urgency.

“If they try to sound like there is no cholera, then when they ask for money to treat it, donors get confused,” said Oliver Schulz, the chief of mission for Doctors Without Borders, which runs several clinics.

All the while, Haitian government health workers involved in cholera treatment centers have not been paid in months, some for almost a year, according to the United Nations Office for the Coordination of Humanitarian Affairs. A disease surveillance system that enabled workers around the country to send text messages about suspected cholera cases to the ministry of health does not always work, “delaying the response time,” according to a review by the humanitarian affairs office, which also recommended more systematic use of tests to differentiate cholera from other causes of diarrhea.

The ranks of malnourished children, who are most susceptible to cholera because of low immunity, have also grown in the last year. Less than two-thirds of the population has access to clean drinking water. According to the United Nations humanitarian office’s latest country report, published at the end of 2013, “the main cause for the persistence of cholera in Haiti is the lack of access to clean water and sanitation facilities and poor hygienic practices.”

That is what brought Jislaine Marc, 15, to the general hospital in Port-au-Prince in early April. Her family said the girl had suddenly been struck by violent vomiting and diarrhea — the telltale, debilitating signs of cholera. Had she reached a hospital on time, she could have been saved, with one of the cheapest, easiest remedies of all: oral rehydration salts. But she did not. She died.

At the hospital, the girl was not tested for cholera. Hospital workers told the family she was dead on arrival. They ordered family members to take the body home. At first, the family refused to believe she was dead.

Soon, another family member showed symptoms and was rushed to a clinic run by Doctors Without Borders, which dispatched health workers to Jislaine’s house, sprayed it with a disinfectant bleach solution and informed the health ministry to remove the girl’s corpse.

“It was so sudden,” the girl’s aunt said, as the health workers adjusted a white tarp over Jislaine. “She was just a normal kid who went to school and church.”