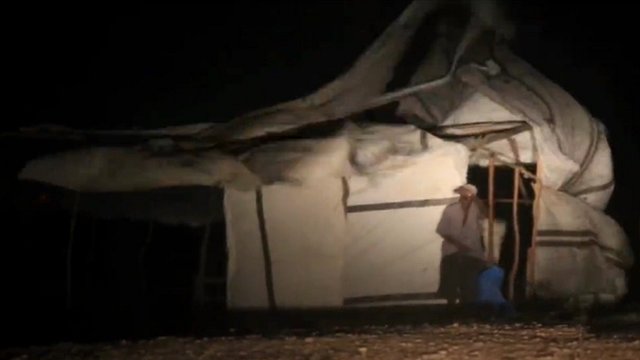 The US National Hurricane Centre says the heavy rainfall is a “major threat” and may cause floods and mudslides.

Aid groups warn that some 400,000 Haitians still living in makeshift camps after the deadly earthquake of 2010 are extremely vulnerable.

Storm warnings are also in place for neighbouring Dominican Republic, as well as Cuba and parts of Florida.

The United States National Hurricane Centre (NHC) predicts that the storm will move near or over Cuba later on Saturday and approach the Florida Keys on Sunday.

It said Isaac had displayed “some increase in forward speed” as it ripped across Haiti.

The storm could pose a potential threat to Florida during the US Republican National Convention.

Although Isaac did not become a hurricane as it hit Hispaniola – the island shared by Haiti and the Dominican Republic – the near-hurricane strength winds and rain have the potential to cause great destruction, especially in Haiti.

Jessica Schauer from the NHC said Haiti could see up to 20 inches of rainfall, “threatening flash floods and mudslides”.

In Haiti, the approximately 400,000 people still living in makeshift camps without proper shelter following 2010’s devastating earthquake are at the mercy of the elements.

“Without a stable sanitation system or permanent housing, heavy rain and wind can create much larger problems like disease from water contamination,” the Haiti director of World Vision Jean-Claude Mukadi told the AFP news agency.

The country’s president, Michael Martelly, has toured some of the camp sites.

“It looks like the south coast is going to get hit, but again we’re so fragile here in Port-au-Prince that just some rain can cause a lot of damage,” Associated Press quoted him as saying afterwards.

Isaac is also expected to bring rain and wind to nearby Puerto Rico.

Several Cuban provinces are now on a state of alert, as are parts of the Bahamas and the Turks and Caicos islands. 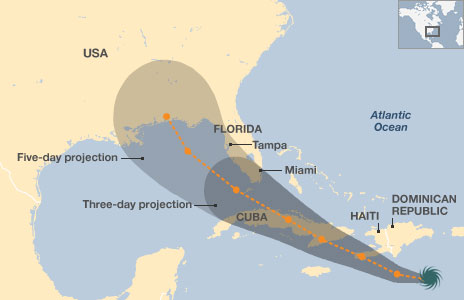