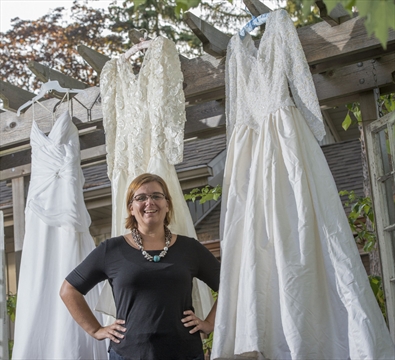 It’s a labour of love for Nicola Topsom to help the women of Haiti add a little glamour to their lives. She has helped set up charity wedding shops in Haiti that depend on donated gowns and formal wear from Canadians.
Hamilton Spectator
By Carmela Fragomeni

Nicola Topsom has a soft spot for the Haitian brides of Port-au-Prince.

After having volunteered there — and adopting one of her two young daughters from Haiti — Topsom wanted to assist the impoverished country in some way while also “bringing beauty to a city still reeling from the disaster of 2010.”

That disaster was the earthquake that killed 316,000 people in Haiti and displaced another 1.5 million.

Topsom, 41, of Burlington, had noticed that weddings are a big deal for Haitian brides. Two senior bridesmaids also wear white gowns, and there are at least six bridesmaids, five or six flower girls, and a matching number of groomsmen and ring bearers.

“I wanted to give an opportunity to even the poorest of brides to wear the dress of their dreams,” says Topsom, a personal support worker in Hamilton.

So, she and her sister in Newfoundland, and a friend in Alberta, started collecting used wedding dresses and attendant gowns a year ago to send to Haiti. They got a generous response, including three new gowns from a Vancouver shop with the $1,000 price tags still attached and 130 bridesmaids dresses from Betrothed, a Cambridge shop.

“I had a big, beautiful wedding dress 21 years ago and I think all girls, no matter where they are, want to look beautiful and be their best and be a princess on their wedding day, whether their father is a mango seller or a ditch digger.”

Topsom opened two pay-what-you-can stores in Port-au-Prince in the spring to sell the dresses for whatever the bride can afford, even if it’s $5.

“The main purpose of the two stores is to give every girl the opportunity to feel her best on a special occasion and to create jobs for Haitians so they can be self-sustaining,” Topsom says of the Floriana Project, named in memory of her late father.

The project also creates a way for people to have “a family gathering where everyone is excited to get together for a wedding. Everyone looks wonderful.”

Topsom makes no money. Haitian volunteers run the store, with the goal of eventually generating enough revenue to be paid someday.

Another goal is to set up a sewing area for jobs for mothers sewing christening gowns and flower girl dresses using material from donated, damaged gowns.

“I had always wanted to set up a project in Haiti that would be run by Haitians to give them an opportunity to change their future. I find them to be hardworking, efficient and entrepreneurial and I wanted to give a hand up, not a hand out.”

Topsom wins high praises from Art Duerksen, with the Hamilton charity Joy and Hope of Haiti, through which the dresses are shipped.

“I know what it takes to make things happen the way she does … It’s a lot of hard work and a lot of perseverance and a lot of patience, because it takes time. I personally think she’s an extraordinary lady,” he says. “She really has grasped the concept of giving a hand up, not a hand out. She helps the Haitians help themselves.”

Janice Black, who stores the donated gowns in her Burlington home, caught Topsom’s enthusiasm. “Every woman has a dress they don’t need in her closet … When you ask, the response is wonderful.”

Topsom has so far collected and sent 500 formal dresses, but only 100 are wedding gowns. Three hundred of them (plus two sewing machines) recently went with a container of goods shipped out by Joy and Hope of Haiti.

Topsom hopes to ship another 400 before Thanksgiving. To donate a wedding dress or formal wear, contact her at 905-749-3733 or Nicola@morethanatourist.com.