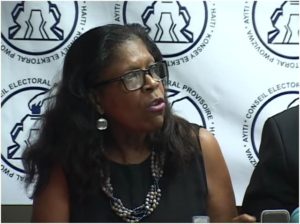 PORT-AU-PRINCE, Haiti (sentinel.ht) – As thousands protest for the resignation of the electoral council because of a broken and unaccountable process, Provisional Electoral Council member Marie-Carmelle Paul Austin is finding the time to release and promote her new book.

On Wednesday, September 16, 2015, Councilor Paul-Austin used the opportunity of an hour-long interview on one of Haiti’s leading political talk radio shows, Intersection, hosted by Jean Monard Metellus, to talk about her new book.

The subject of the highly contentious elections which are needed to elect a new president, 20 senators, 119 deputies, and thousands of local officials, was not addressed until the final ten minutes of Wednesday’s interview. On Friday, September 18, 2015, Councilor Paul-Austin held a book-signing at the Gardens of MUPANAH.

Marie Paul-Austin is also one of two electoral councilors whose legitimacy in the institution is being challenged. Austin had not obtained a certificat de decharge as required by the Constitution of Haiti for her tenure as Minister of Education under former President Jean-Betrand Aristide from 2002-2004.

The other electoral councilor who does not have a certificate showing proper handling of public funds in a previous official role is the CEP President, Pierre Louis Opont, who was director general of the CEP which organized the widely fraudulent 2010 elections. It should be noted that the CEP excluded candidates from elections for absence of ministerial-level certificat de decharge despite the impossibility of obtaining one.

In 2003, Paul-Austin was implicated in a scandal where $350,000 [US] of public funds meant for secondary final exams was found misappropriated. In September of 2003 she was the subject of hearings in the Chamber of Deputies aimed at obtaining a vote of no confidence against her. She ultimately resigned on December 11, 2003.

The Provisional Electoral Council today is facing accusations of having squandered $38 million [US] provided by the United States and others in the international community for the events of August 9, 2015, that have been given for elections. It deserves to be noted that $38 million [US] is more than four times the cost of elections in countries of similar or greater populations across the world.

The ex-Minister of Finance, a CEP member, and CEP chief Opont, have not personally obtained the required financial discharges needed to qualify for their positions.

And so, the CEP is illegal in its own make-up.