Hormonal birth control, a medication that millions of people in the U.S. use, can also raise your risk of a blood clot. 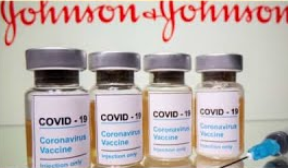 Federal health agencies have recommended that states pause their rollout of the Johnson & Johnson coronavirus vaccine after six women developed “a rare and severe type of blood clot” within about two weeks of getting vaccinated.

Meanwhile, hormonal birth control, a medication that millions of women in the U.S. use, can also raise your risk of a blood clot. But the CDC and the FDA have not proposed that women yank out their NuvaRings or trash their pills.

U.S. health authorities are facing a dilemma. Pausing the Johnson & Johnson rollout not only risks slowing down the U.S. fight against the pandemic—it may also increase already-rampant distrust of and fuel misinformation about all the coronavirus vaccines. But the Johnson & Johnson-linked blood clots are serious: One of the women has died, and another has been hospitalized in critical condition, according to the New York Times.

“Treatment of this specific type of blood clot is different from the treatment that might typically be administered,” the CDC and FDA warned in a joint statement, explaining that an anticoagulant drug named heparin is typically used to treat blood clots. That drug may be dangerous in these cases.

Still, regardless of the public health debate, the CDC and FDA’s abundance of caution is also a sour reminder for advocates that the side effects of birth control have been deemed a socially acceptable risk.

“The risk of blood clots from birth control pills is 1 in 1,000 and is considered a low-risk side effect,” tweeted Rebecca Wind, who handles communications for the Guttmacher Institute, a think tank that supports reproductive rights. “The risk from the J&J vaccine is 1 in 1,000,000.”

More than 6.8 million people have been given the vaccine. In a Tuesday statement, Johnson & Johnson said that “no clear causal relationship has been established between these rare events” and the company’s vaccine.

Meanwhile, most birth control pills can raise women’s chances of developing blood clots by three or four times, according to the National Blood Clot Alliance. (They do not directly cause clots.) The organization estimates that about, per year, 1 in 1,000 women who take the pill will develop a clot.

“I have a J&J appointment in an hour, and if I don’t get a vaccine because 6 people out of 6 million got blood clots after I was allowed—nay, encouraged—to take hormonal birth control for DECADES, you will be hearing about a tiny little one woman riot,” a Twitter user by the name of Emily Dagger wrote in a now-viral tweet Tuesday. (Her original Johnson & Johnson jab was cancelled, she said, but she ended up getting a shot of Moderna.)

Women have also so far reported experiencing more side effects from the vaccines than men. Roughly 79 percent of the nearly 7,000 reports about side effects processed by the CDC have been from women. These are relatively mild side effects, like fatigue and headaches, and the reasons for that disparity aren’t exactly clear-cut.

Compared to men, women tend to have stronger immune responses to vaccines in general, but they also take more advantage of health care services and may therefore be more likely to report side effects in the first place. And yes, good old-fashioned sexism may also be at work: Men and women get the same dose regardless of their size, which may lead women to get a bigger dose of the vaccine than they need. A 2008 study of a flu vaccine found that women only needed a half-dose of a vaccine to generate a similar immune response to men who received a full dose.

In a statement released Tuesday, White House COVID-19 Response Coordinator Jeff Zients said that the U.S. already has enough doses of the Pfizer and Moderna vaccines to reach 300 million Americans. That’s more than enough, Zients said, “to reach every adult who wants to be vaccinated.”