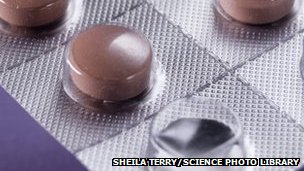 Combining drugs can reduce the risk of resistance

Researchers who evaluated a global subsidy for malaria treatment say it had a substantial impact in a short space of time.

Publishing their results in The Lancet, the global health experts acknowledged that the scheme had been “highly controversial”.

The Affordable Medicines Facility for malaria (AMFm) was called into question by Oxfam last week.

The research says it reduced the price of drugs and led to more treatment.

AMFm was launched in seven African countries by the Global Fund with the aim of bringing down the price of the most effective form of malaria treatment, to discourage problems with resistance.

“This programme rapidly met its benchmarks despite the many constraints, expectations and unrealistic timelines imposed on it”

The researchers, led by a team from London School of Hygiene and Tropical Medicine, found the subsidy led to large falls in the price of drugs in most of the pilot schemes.

They said: “There had been concern that the poorest would not benefit from the programme, because the drugs were not free.

“The effect of AMFm in Niger and Madagascar was limited, with low orders.

“In all other pilots, it’s likely AMFm had a dramatic effect on drugs sold through the private for-profit market.

“These changes were substantial and achieved in only a few months, which showed the power of tapping into the distributional capacity of the private sector.”

Oxfam has criticised the scheme for focusing on “untrained shopkeepers” to help deliver treatment in rural communities – but supporters of AMFm claim these objections are purely ideological.

The evaluation did not measure health outcomes, and the researchers said data on the use of treatment was not yet available.

In an accompanying comment article, 10 eminent scientists noted “unremitting opposition” to AMFm from the United States, and appealed for the scheme to be preserved in its current form when the Global Fund’s board decides its future next month.

The scientists said: “This programme, when fully implemented, rapidly met its benchmarks despite the many constraints, expectations and unrealistic timelines imposed on it.

“We must acknowledge that an efficient approach to subsidising anti-malarial drugs has worked, making them available in the private sector where people go to buy them.”

Anything is better than nothing!

Those who are against the project are people who have never lived in the world of stark reality. Malaria is a scourge that devastates large areas and without any and all efforts, more and more will die.

People on the ground think it is effective.

They are all that counts.