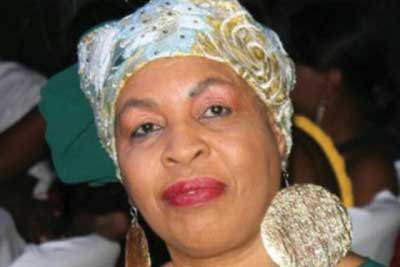 Haiti’s outgoing president has released a brash pop song jeering at his critics and aiming sexually suggestive lyrics at his main target, an award-winning female journalist.

In an unusual move by a sitting leader, President Michel Martelly released during what is likely his last week in office a track called “Bal Bannann Nan” — Haitian Creole for “Give Them the Banana.” The song is credited to Sweet Micky, the stage name he used as a pop star before being elected.

The president could not be contacted to talk about his intentions. Mantelly’s choice to be Haiti’s next president, Jovenel Moise, is nicknamed “Neg Bannann” — Banana Man in Haitian Creole.

Martelly’s song was the talk of social media and Haiti’s call-in radio shows Monday. While some dismissed it as a light piece of entertainment that harkens back to the president’s days as the self-proclaimed “bad boy” of Haitian pop music, others were repelled.

“I want to vomit when I see other women applauding Martelly’s Carnival song denigrating another woman, our most famous human rights activist,” tweeted Chantal Elie, a political analyst who once worked in Martelly’s administration before quitting.

Others questioned Martelly’s judgment in releasing such a song while Haiti grapples with a political crisis trying to pick his successor. A runoff presidential election has been indefinitely postponed and Martelly is required by the constitution to leave office Sunday, raising fears that Haiti could backslide into instability amid the leadership vacuum.

“This is the end of your term and this is the way you’re acting?” Pierre-Paul said on Radio Kiskeya.

The journalist, who was tortured during Jean-Claude Duvalier’s dictatorship and went into hiding after a military coup that toppled President Jean-Bertrand Aristide, is an outspoken advocate of free speech and democracy. In recent years, she has been a prominent critic of Martelly.

Martelly’s song, which also accuses a male journalist of using skin lightening cream in hopes of becoming a “pretty girl,” has been listened to over 117,000 times since Sunday on an Internet site where new Haitian Carnival songs are featured. It was released as Port-au-Prince prepares to celebrate the annual festival next week.

It’s not the first time Martelly has been criticized for coarse language during his presidency.

A sexually charged comment he made to a female critic at an August campaign rally prompted a politically allied party to announce the resignation of three officials from Martelly’s administration, including the minister for women’s affairs

Before becoming president, Martelly was a major star of compas, Haiti’s high-energy version of merengue music. He was known for wild onstage antics that included cursing rivals, donning dresses and mooning the audience.

Martelly has said he hopes to perform on a Carnival float on the day he leaves office.

3 thoughts on “SONG BY MICHEL MARTELLY JEERS AT FEMALE JOURNALIST – ACTUALLY A PAYBACK FOR HER DEVASTATING UNTRUE, SLANDEROUS ONGOING ATTACK ON MARTELLY’S YOUNG SON OLIVIER, CLAIMING HE WAS ARRESTED IN MIAMI WHEN THIS WAS NOT TRUE. – SEE VIDEO”