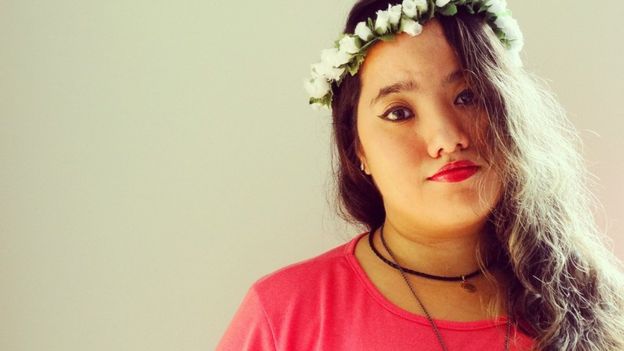 Image copyright Ana Carolina CaceresBrazilian journalist Ana Carolina Caceres, 24, was born with microcephaly, a congenital malformation that means babies are born with abnormally small heads and may suffer from delayed brain development. The condition is suspected to be linked to the Zika virus, which has been spreading through the Americas.

Dismayed by recent comments about microcephaly, Ms Caceres decided to tell her story.

On the day I was born, the doctor said I had no chance of survival. “She will not walk, she will not talk and, over time, she will enter a vegetative state until she dies,” he said.

I grew up, went to school, went to university. Today I am a journalist and I write a blog.

I chose journalism to give a voice to people like me, who do not feel represented. I wanted to be a spokesperson for microcephaly and, as a final course project, I wrote a book about my life and the lives of others with this syndrome.

I can say that today I am a fulfilled, happy woman.

With the spike of microcephaly cases in Brazil, the need for information is more important than ever. People need to put their prejudices aside and learn about this syndrome.

Including the health minister. He said that Brazil would have a “damaged generation” because of microcephaly. If I could speak to him, I would say: “What is damaged is your statement, sir.”

Microcephaly is a box of surprises. You may suffer from serious problems or you may not. So I believe that those who have abortions are not giving their children a chance to succeed.

I survived, as do many others with microcephaly. Our mothers did not abort. That is why we exist.

It’s not easy, of course. Life was hard for me and my family. My dad is a lab technician and was unemployed when I was born. My mother was a nursing assistant.

Health insurance covered a few things, such as labour expenses. But other tests were not covered and were very expensive.

The whole family got together – uncles, aunts and others. Everyone gave what they could to cover the costs.

I had five operations, the first just nine days after I was born, because I was not breathing properly.

I also had seizures. Apparently it’s something that all people suffering from microcephaly will have. But it’s not a big deal – there are drugs to keep it under control.

I took medication until I was 12, then never needed it again. Now I am even able to play the violin!

So when I read that activists in Brazil were urging the Supreme Court to allow abortion in cases of microcephaly, I felt offended and attacked.

I believe that abortion is a short-sighted attempt to tackle the problem. The most important thing is access to treatment: counselling for parents and older sufferers, and physiotherapy and neurological treatment for those born with microcephaly.

I certainly know that microcephaly can have more serious consequences than the ones I experienced and I am aware that not everyone with microcephaly will be lucky enough to have a life like mine.

But what I recommend to mothers or pregnant women is that they remain calm. Microcephaly is an ugly name but it’s not an evil monster.

Have your prenatal tests done sooner rather than later and seek the advice of a neurologist, preferably before your baby is born.

Also, get to know mothers of children with microcephaly. There are groups of women on Facebook with two or three children with the syndrome who can tell you about their lives.

If there are still parents who choose to abort, I cannot say anything. I think the choice is theirs. But they need to make that decision knowing all the facts.