The Canadian singer’s striking new album is themed around the US occupation of her parents’ homeland – but is a lilting, joyful record about omens, civil treachery and sexuality 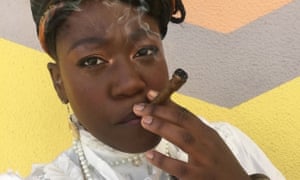 On a dull January afternoon, Mélissa Laveaux arrives at her record label’s Paris office apologising for her lateness. Disorganisation is, she says, a lifelong affliction.But the 33-year-old is in the middle of so many self-directed projects that it’s hard to take her claims too seriously. It takes a polymath to simultaneously mastermind a play about Haitian spirits, a multimedia project about a 19th-century sculptor and an album about the American occupation of Haiti in the early 20th century.

Laveaux moved to France 10 years ago when Paris-based label No Format offered to release her music. Born to Haitian parents in Ottawa, she describes her childhood as traditional, though with one missing aspect – her parents wanted Laveaux and her sister to assimilate and speak perfect English and French, so refused to teach them Creole. “All the cool Haitian kids spoke Creole. It felt like a sorority we didn’t have access to,” says Laveaux. “It felt like something was missing.”

Immersion in Creole culture was one of the prompts to make this album. The other was a childhood love that Laveaux’s parents did foster, of the Haitian singer and activist Martha Jean-Claude. Laveaux first heard her aged six, and started playing her songs after she got her first guitar following her first trip to Haiti, aged 12. “When I moved to Paris, one of the artists that still carried me was Martha Jean-Claude,” she says. An invitation to perform her songs at a benefit for the 2010 Haitian earthquake didn’t pan out, but it did turn into an obsessive research project.

But the more she learned about Jean-Claude, the bigger the project got. She hadn’t known that the country was under American occupation between 1915 and 1934. “Nobody had told me!” Laveaux says. “I felt very cheated by my parents.” She decided to make her second trip to Haiti, researching at institutions including the Centre d’Art, still in a state of disrepair following the earthquake. “I was afraid I wouldn’t be claimed by other Haitians, but people kept thinking I was somebody’s daughter, and urging me to speak Creole. I felt claimed,” she says. She took pride in finding that her music had been bootlegged, distributed and stored in the National Archives.

Laveaux returned to Paris overwhelmed with books and CDs of traditional songs: voudou spirituals such as Legba Na Konsole, and folk songs, including Kouzen, which Jean-Claude recorded during her exile in Cuba. She decided to parse the “chaos”, as she calls it, by taking inspiration from sci-fi and refashioning her own narrative of the US occupation from the songs she found, referencing omens, civil treachery and voudou’s exuberant, complex depiction of sexuality, which the occupiers had tried to suppress. The album contains one track of her own, Jolibwa, about the population protesting the imprisonment of journalist Joseph Jolibois by dancing outside his cell (Jolibois died in jail in 1936). She was pleased by recent footage from New York that saw a group of Haitians protesting outside Trump Tower by dancing in the streets after news emerged that the President had allegedly called Haiti a “shithole”. 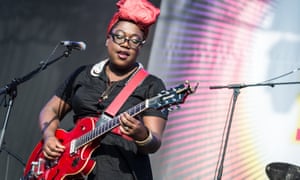 ‘There’s not a lot of visibility for black women with guitars unless you’re playing blues or singing gospel.’ Photograph: David Wolff – Patrick/Redferns via Getty Images

Despite its heavy historical themes, Radyo Siwèl is a beautifully light record. Levity is key to sustaining the energy to fight, says Laveaux, who calls France “a super-sexist country” and says she wasn’t at all surprised by the recent backlash against #MeToo by certain French actresses. “This meme keeps going around online, ‘I am my ancestors’ wildest dreams’ – and I’m like, I hope I am! They couldn’t have gone through all that sacrifice without thinking something better’s gonna come.”

Laveaux struggles with her place in an industry where she doesn’t see herself represented. “There’s not a lot of visibility for black women with guitars unless you’re playing blues or singing gospel. And if I wasn’t playing guitar, then people are like: ‘Cool, R&B!’ If I don’t make R&B, do I have any longevity in my career?” But she keeps the faith that “if I just make really good work, people will listen to it”.

In the absence of contemporary peers, Laveaux is looking to history for inspiration. She recalls as a child seeing an image of Sister Rosetta Tharpe. “Without that, I wouldn’t have thought I could play music.”

Last summer, she participated in a Rome residency to pursue a project related to Italian culture. She chose as her subject Edmonia Lewis, a black, queer, Ojibwe sculptor who moved from New York to Rome in 1866 and became a noted artist, despite being fetishised and tokenised by the locals. “That resonated with me so much,” says Laveaux, who interviewed other black artists working in Italy for a film that will accompany an eventual record. “They had similar hurdles to what I read in Edmonia Lewis’ diary. In 150 years, nothing had changed.”

She laughs as she says this, more bemused than crushed. On her right arm is a tattoo of Cleopatra in tribute to a Lewis sculpture, surrounded by a Kara Walker image of a young girl setting herself on fire, and Tina Turner astride Ike, inspired by the tarot card for strength. “That card is about taming your demons and having guidance from the spiritual world to overcome a great fear,” says Laveaux.

Until the gods stage a divine intervention, she has another idea of how to challenge racism and cultural imperialism. “One of my dreams is to write a song for Eurovision.” she says. “You can influence millions of people’s ways of listening to music.” If anyone can fit it in, she can.

An EP featuring the first three tracks of Radyo Siwèl is released today. The album is out on 23 March on No Format. Mélissa Laveaux plays Richmix, London, on 13 April.

… we have a small favour to ask. More people are reading the Guardian than ever but advertising revenues across the media are falling fast. And unlike many news organisations, we haven’t put up a paywall – we want to keep our journalism as open as we can. So you can see why we need to ask for your help. The Guardian’s independent, investigative journalism takes a lot of time, money and hard work to produce. But we do it because we believe our perspective matters – because it might well be your perspective, too.

I appreciate there not being a paywall: it is more democratic for the media to be available for all and not a commodity to be purchased by a few. I’m happy to make a contribution so others with less means still have access to information. Thomasine F-R.

If everyone who reads our reporting, who likes it, helps fund it, our future would be much more secure. For as little as $1, you can support the Guardian – and it only takes a minute. Thank you.