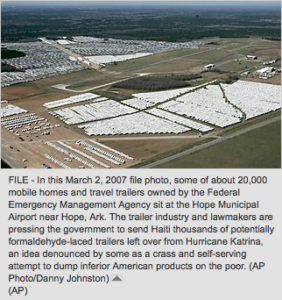 The trailer industry and lawmakers are pressing the government to send Haiti thousands of potentially formaldehyde-laced trailers left over from Hurricane Katrina — an idea denounced by some as a crass and self-serving attempt to dump inferior American products on the poor.
“Just go ahead and sign their death certificate,” said Paul Nelson of Coden, Ala., who contends his mother died because of formaldehyde fumes in a FEMA trailer.
The 100,000 trailers became a symbol of the Federal Emergency Management Agency’s bungled response to Katrina. The government had bought the trailers to house victims of the 2005 storm, but after people began falling ill, high levels of formaldehyde, a chemical that is used in building materials and can cause breathing problems and perhaps cancer, were found inside. Many of the trailers have sat idle for years, and many are damaged.
The U.S. Agency for International Development, which is coordinating American assistance in Haiti, has expressed no interest in sending the trailers to the earthquake-stricken country. FEMA spokesman Clark Stevens declined to comment on the idea.
Haitian Culture and Communications Minister Marie Laurence Jocelyn Lassegue said Thursday she had not heard of the proposal but added: “I don’t think we would use them. I don’t think we would accept them.”
In a Jan. 15 letter to FEMA, Rep. Bennie Thompson, D-Miss., chairman of the House Committee on Homeland Security, said the trailers could be used as temporary shelter or emergency clinics.
“While I continue to believe that these units should not be used for human habitation, I do believe that they could be of some benefit on a short-term, limited basis if the appropriate safeguards are provided,” he wrote.
For the recreational-vehicle and trailer industry, which lost thousands of jobs during the recession, the push to send the units to Haiti is motivated by more than charity.
Bidding is under way in an online government-run auction to sell the trailers in large lots at bargain-basement prices — something the RV industry fears will reduce demand for new products. Some of the bids received so far work out to less than $500 for a trailer that would sell for about $20,000 new.
Lobbyists for the Recreational Vehicle Industry Association — which includes some major manufacturers in Elkhart, Ind., among them Gulf Stream — have been talking with members of Congress, the government and disaster relief agencies to see if it would be possible to send the trailers to Haiti instead.
“This isn’t really the best time for the RV industry to have very low-priced trailers put out onto the market,” said the group’s spokesman, Kevin Broom.
How much formaldehyde the trailers contain — or if they still have any at all — isn’t known. The auction site warns that the trailers may not have been tested for the chemical, and FEMA said buyers must sign an agreement not to use the auctioned trailers for housing. Broom contends the majority are “perfectly safe,” and “the handful of trailers that might have a problem” can be removed.
Though the formaldehyde fumes in the trailers may have lessened with time, Haiti’s hot, humid weather would boost the amount released, said Becky Gillette, the formaldehyde campaign director for the Sierra Club.
Lindsay Huckabee, who blames a rash of illnesses on the two years she lived with her husband and five children in FEMA trailers in Kiln, Miss., said that while “some shelter is better than no shelter,” sending FEMA trailers is a bad idea without tight controls and warnings.
“I think it’s very self-serving to hand off a product that’s not good enough for Americans and say, ‘Hey, we’re doing a good thing here,'” she said.
In Haiti, Ermite Bellande said she has had no shelter since losing her three-story house. Still, she doesn’t want one of the trailers. “We have nothing,” she lamented. “But I would rather sleep outside than be in a metal box full of chemicals.”
Joseph Pacious, who was hoping to find shelter at a tent city near the Port-au-Prince airport, disagreed. “The trailers may be hot, and they may make us sick,” he said. “But look at how we are living already. How bad can it be?”
Myriam Bellevu, who is sleeping in a tent because she does not feel safe in her damaged home, said: “If the trailers are not good, the Americans must keep them for themselves. It’s true that we are poor, but if they want to help, they must help in a good way.”
Among the lawmakers backing the idea is Mississippi state Sen. Billy Hewes.
“If I had the choice between no shelter and having the opportunity of living in a shelter that might have some fumes, I know what I’d choose,” he said. “If these trailers were good enough for Mississippians, I would think they were good enough for folks down in Haiti as well.”

There is an old Creole Proverb that says…”Bad is better than worse.”

And so it is with the potential dangers of living in a FEMA trailer compared with  day-to-day life as it now exists in Haiti.

We need everything we can get.

The FEMA trailers would be perfect and the non-airconditioned Haitian scene will see doors and window left open, lessening the dangers of any vapor present. Tens of thousands are now sleeping on the ground, with absolutely no protection. When the rainy season starts – SOON – there will be an upsurge of colds, leading to pneumonia and possible death.

Send in the trailers!!!!