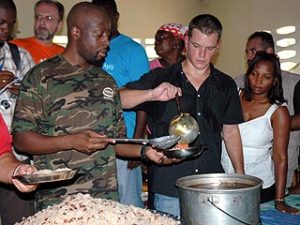 NEW YORK – Sean “Diddy” Combs, Queen Latifah and Pharrell are set to host a two-hour concert and telethon to benefit Haiti on Feb. 5.

The concert is titled “SOS Saving OurSelves — Help for Haiti.” It will be held at the American Airlines Arena in Miami and will air live on BET, MTV, VH1 and Centric at 8 p.m. EST.