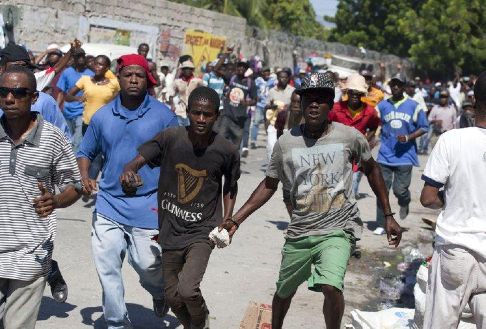 The U.S. government has made it clear that it has no intention of disputing the results that Haiti’s Provisional Electoral Council (CEP) announced on Nov. 24.

They put Jovenel Moïse, representing the Haitian Bald-Headed Party (PHTK), the current government party of Michel Martelly, first with 33 percent of the vote. Jude Célestine, running for the Alternative League for Progress and Haitian Emancipation (LAPEH), came in second with 25 percent. Moïse and Célestin are set to run in the second round on Dec. 27.

Célestin told the AP on Nov. 27 that “no decision had been made” whether he would contest Moïse in the second round. He has a loose coalition with eight other parties that ran in the presidential campaign and says he wants to consult with them.

The Haitian people have made it clear that they see the election as a fraud. They have been out in the streets in numbers, decrying what they call the “electoral coup d’etat” nearly every day. When Jovenel Moïse made a quick trip on Nov. 20 to Miami and Brooklyn, the two largest Haitian communities in the United States, a militant demonstration confronted him in both cities, organized in a few hours.

A U.S. delegation of election monitors from the National Lawyers Guild and the International Association of Democratic Lawyers Delegation said it “fell far short of minimum standards for fair elections” and called for an independent investigation. (Haïti-Liberté, Nov. 25.)

While the U.S. government pleads ignorance on the legitimacy of both the presidential election held Oct. 25 and the parliamentary ones held Aug. 9, it is obviously satisfied with the results. The U.S. special coordinator for Haiti, Kenneth Merten, who claimed the United States government just didn’t know, said publicly on Nov. 23, “It would be premature for us, in my view, to prejudge this election as terrific or awful.” (Tico, Nov. 26).

Washington has never hesitated to interfere in Haiti’s internal affairs. In the 2010 election, then Secretary of State Hillary Clinton personally came to Haiti and told the CEP to replace Célestin with Michel Martelly for the run-off.

The people of Haiti are struggling to control their country and they will continue this struggle no matter what happens to this election.

Haiti has an election and – of course – there was some fraud. Anywhere, in the world, elections have fraud.

What set this election aside from all previous ones, was the fact that there was less fraud than ever before.

The people voted for Jovenel Moise and – he was actually given enough votes to be declared outright President – first round.

For fairness, Jovenel Moise will run-off against Jude Celestin.

So Celestin, and the opposition, resort to terror on the streets at a level unseen since the ARISTIDE/PREVAL eras.  A few dozen terrorist destroy cars, break store windows and throw food merchants food onto the streets. Yesterday, the Celestin, Aristide, Moise Jean-Charles people took piles of chicken, prepared by street merchants for Sunday, and threw this into the gutter, urinating on it.

The chicken represented the merchants entire store of cash and they are effectively ruined by this crime.

Give Haiti a break.

Let the people vote in December and see the Truth.